26506
Behavioral Artistry: Validation of Preferred Characteristics of Effective Behavioral Interventionists in Autism By Parents and Practitioners

Objectives: We investigated Foxx’s conclusion that behavioral interventionists today lack important interpersonal behaviors associated with BA when compared to service providers in other human services professions, and whether parents of children with autism, and other service providers, prefer characteristics associated with behavioral artistry: (1) Can BA characteristics be correlated with validated standardized assessments?; (2) What are the relationships between self-reported characteristics of BA and students majoring in Behavior Analysis, Special Education, Rehabilitation Studies, Other Human Services majors, and Engineering/Computer Science?” and (3) What is the level of social validity of BA characteristics by parents of children with ASD?

Methods: We reviewed psychological assessments in order to correlate operationally-defined BA traits. Expert raters (N=38) determined that Cattell’s Sixteen Personality Factor Questionnaire (16PF) correlated significantly with BA traits. An online 16PF survey was completed by more than 200 university students in the target majors, many of whom currently provide services for individuals with autism at a university-based treatment center. ANOVA and other statistical analyses were conducted to determine differences between levels of BA reported by undergraduate and graduate students in the various majors. An online survey was completed by a national sample of parents (N=86) of children with ASD. Parents read descriptions of characteristics of autism service providers and chose preferred traits. Responses were analyzed to determine the level of social validity for the correlated BA traits.

Results: Students majoring in behavior analysis reported a lower percentage of BA traits than those in all other human services majors. Parents of children with autism preferred the 16PF factors associated with BA traits over non-BA traits for 14 of 15 traits.

Conclusions: These results provide face and concurrent validity for the concept of BA as a potential factor in the delivery of improved treatment in autism. Social validation of BA was demonstrated by clear parent preferences for the traits associated with BA by behavior analysts and interventionists. However, our results indicate that behavioral interventionists in the field of autism may lack many important clinical/interpersonal skills. Research is underway to determine if interventionists with lower rates of BA implement treatment less competently and if they have less positive outcomes. This research could have significant implications for the preparation and training of effective service providers in autism. 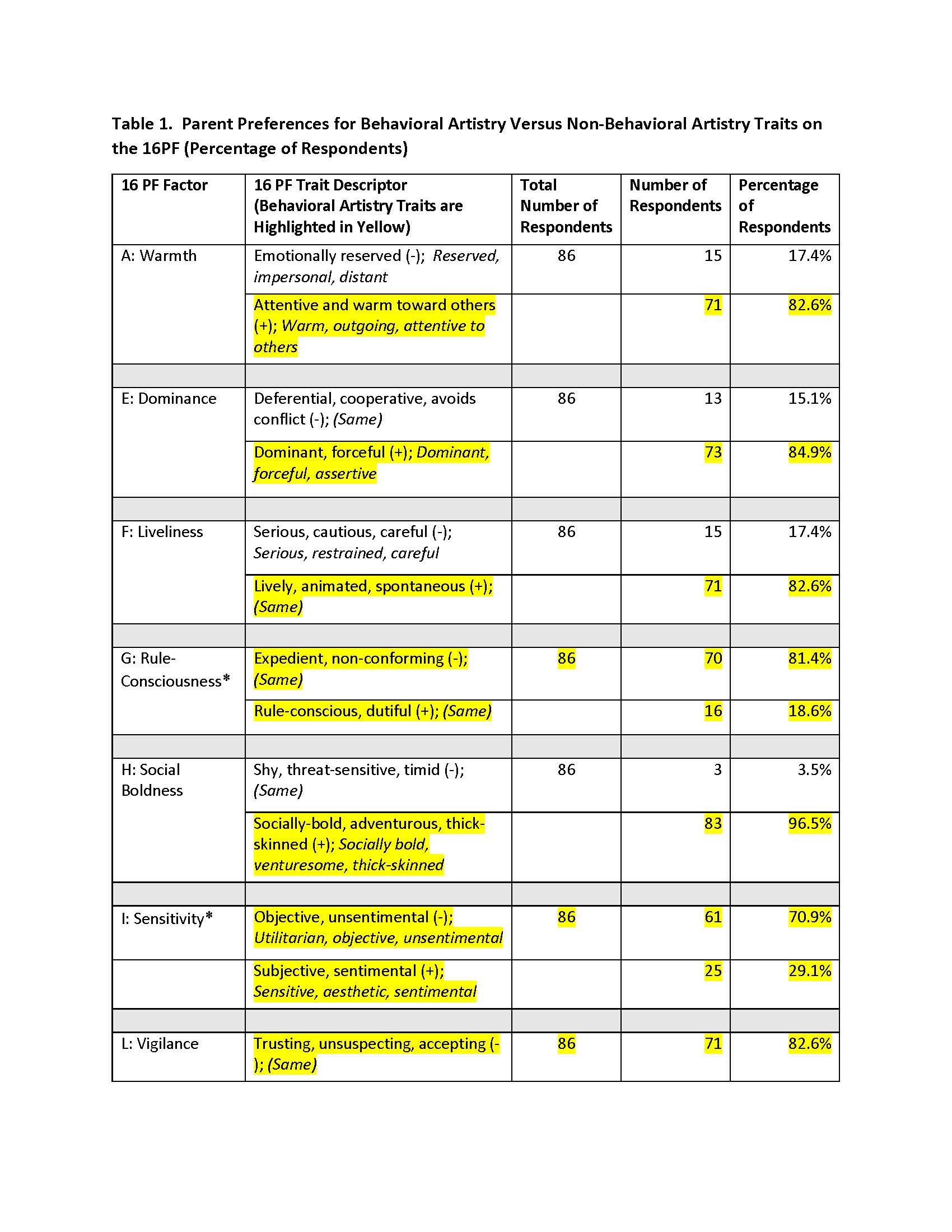