Poster Presentation
Hall Grote Zaal (de Doelen ICC Rotterdam)
D. W. Tan1, M. T. Maybery1, M. Evans2, R. Di Lorenzo3 and A. J. Whitehouse4, (1)School of Psychological Science, University of Western Australia, Perth, Australia, (2)University of Western Australia, Perth, Australia, (3)Utrecht University, Utrecht, Netherlands, (4)Telethon Kids Institute, University of Western Australia, Perth, Western Australia, Australia
Background: Autism spectrum disorder (ASD) is two to four times more prevalent in males than in females. From a biological perspective, one hypothesis suggests that the male preponderance in ASD may be influenced by the exposure to elevated concentrations of testosterone in utero. A parallel stream of research found that heightened levels of prenatal testosterone derived from umbilical cord blood is related to facial morphology. During foetal development, the brain and the face evolve from the neural crest in synchrony. This has led to the speculation that facial morphology may hold crucial information to further our understanding of aberrant neurodevelopment. In our recent work, we reported hypermasculinised facial features among prepubescent boys and girls with ASD compared to children without ASD.

Methods: A total of 1,995 undergraduate students completed the autism-spectrum quotient (AQ). Students aged between 18 and 25 years, and with an AQ score that fell in the bottom, middle and top 15% of the distribution were invited to participate further in this study. Seventy-two Caucasian men and 81 Caucasian women completed the study in which their facial photographs were obtained. Then, on a 100-point scale anchored by 'not at all masculine/feminine' and 'extremely masculine/feminine', the male faces were rated for masculinity and the female faces for femininity by a separate group of naive raters (n = 41; 23 females).

Conclusions: It appears that the relationship between perceived facial masculinity/femininity and autistic-like traits is sex-specific whereby a negative linear relationship is observed between facial femininity and levels of autistic-like traits in women whereas a U-shaped trend is found between facial masculinity and autistic-like traits in men. Findings in the present sample of post-pubertal women are consistent with masculinised facial features observed in prepubescent girls with ASD. However, the current outcomes for men are inconsistent with our previous findings. Taken together, these results suggest the facial structures associated with autistic traits may be stable across development for females but non-linear for males. 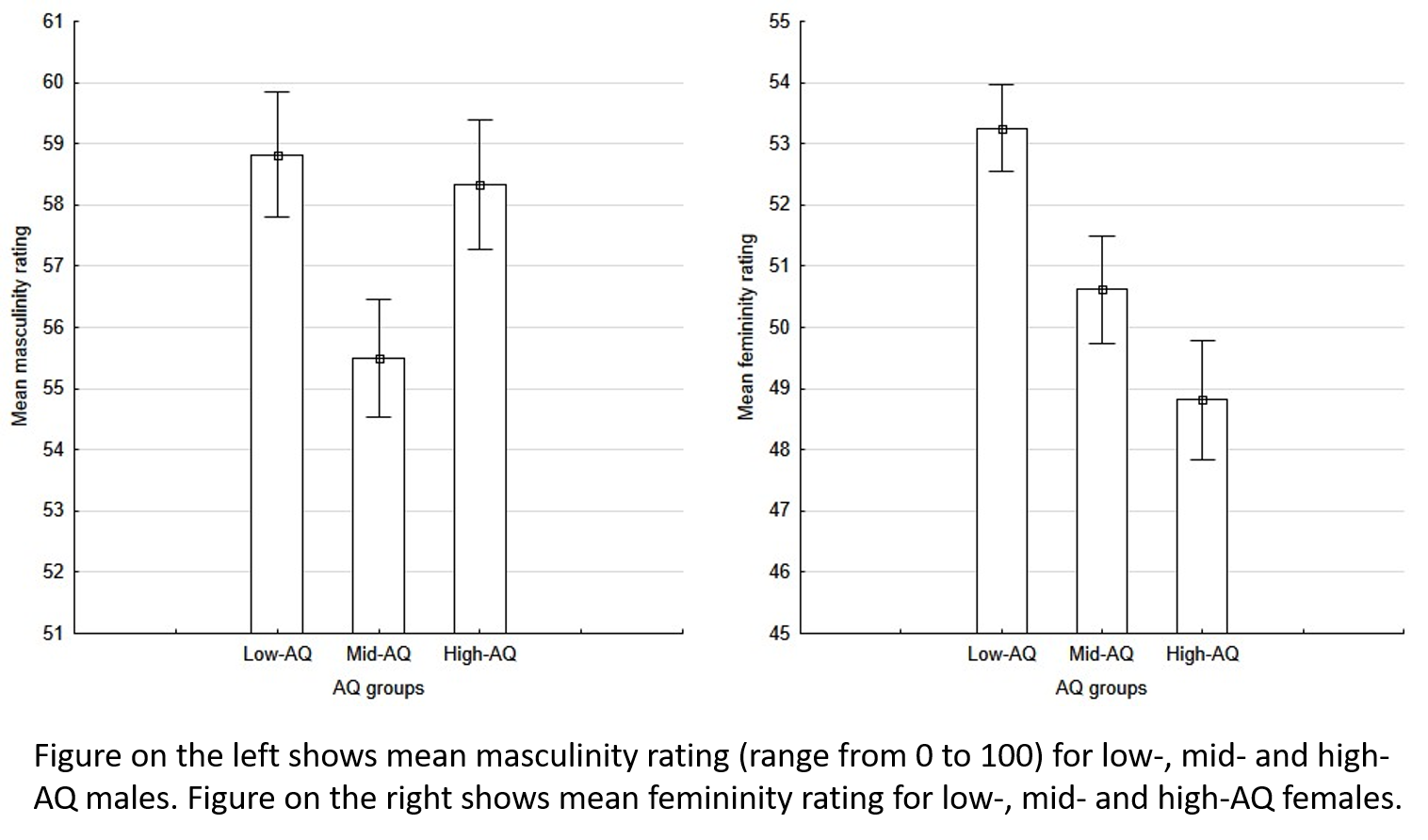