The Broader Autism Phenotype (BAP) is characterised by sub-clinical traits of Autism Spectrum Disorder (ASD), however there is no gold standard assessment for the BAP. The BAP is commonly found in relatives of individuals with ASD, and is most often measured using self- and informant-ratings of ASD traits, and occasionally using a lengthy family history interview as well.

We aimed to 1) validate a brief interview of BAP traits; and 2) elucidate the BAP profile in first-degree relatives of individuals with ASD with at least average cognitive abilities, where genetic factors may more likely be involved in its aetiology.

Parents and siblings from 30 families of individuals with high-functioning ASD (HFA) were assessed for the BAP and associated traits using a 2.5 hour protocol. Clinical best estimate of BAP status was determined using a 30-45 minute interview of BAP traits rated on the Broader Autism Phenotype Rating Scale (BAPRS). To validate the interview, ASD and BAP traits were also measured using self- and informant- ratings on the Social Responsiveness Scale, 2nd ed. (SRS-2) and through self-ratings on the Broad Autism Phenotype Questionnaire (BAP-Q). Psychiatric symptoms and adaptive functioning were measured through self- and informant-ratings using the Achenbach System of Empirically Based Assessment, including the Adult Behaviour Checklist (ABCL). General cognitive abilities were measured using the Wechsler Abbreviated Scale of Intelligence, 2nd ed. (WASI-II).

Conclusions: A brief BAP interview was validated in a sample of families of individuals with HFA. Using this classification of the BAP, it was evident that individuals with the BAP exhibited similar but fewer ASD traits than their relatives with ASD, and had an intermediate expression of psychiatric symptoms including internalising and externalising behaviour, and a similar cognitive profile to individuals with ASD. 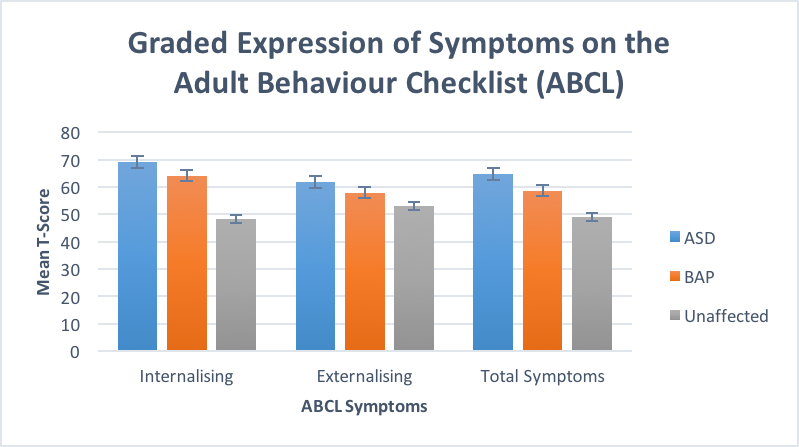