Atypical cortical connectivity is commonly associated with individuals diagnosed with Autism Spectrum Disorder (ASD). However, there is a paucity of research measuring cortical connectivity in autistic people during cognitive tasks, such as facial emotion recognition (FER). While FER is considered impaired in autistic people, the contributing mechanisms remain inconclusive. Here, electroencephalography (EEG) coherency measures were used to provide an indication of the functional communication between cortical regions during FER.

Twenty-two autistic adults and 24 non-autistic typically developing (TD) age, gender, and IQ matched control participants were included. They completed a complex emotion recognition task utilising stimuli selected from the Cambridge Mind Reading Face-Voice Battery (CAMs), a battery consisting of videos of male and female actors displaying positive and negative complex emotions. EEG was simultaneously recorded during the FER tasks and the imaginary part of the coherency was used as our measure of connectivity. The imaginary part of coherency is able to resolve some of the limitations associated with the regular coherence, in particular the spurious connectivity driven by volume conduction and the use of a common reference.

During positive and negative FER, autistic adults showed reduced coherency between short and long range interhemispheric electrodes and reduced long range anterior-posterior connectivity. In response to positive emotion (figure 1), this reduction in coherency was most notable in the beta band, while reduced coherency in the theta and alpha bands was most commonly observed in response to negative emotion (figure 2). These reductions in coherency were paired with an increase in short range intrahemispheric connectivity restricted to frontal and occipital regions in autistic adults.

These findings suggest that altered network functioning involved in FER may contribute to FER impairments in autistic people. The fact that coherency differences between autistic and non-autistic participants differed in accordance with the emotional valence may indicate that divergent processes contribute to ASD-linked impairment during negative and positive FER. Reduced beta coherency during positive FER may indicate inadequate recruitment of task-relevant networks and reduced saliency of social information, while reduced connectivity in theta and alpha bands may indicate reduced integration of sensory systems with higher order cognitive functions (such as top-down attention allocation) during negative FER. 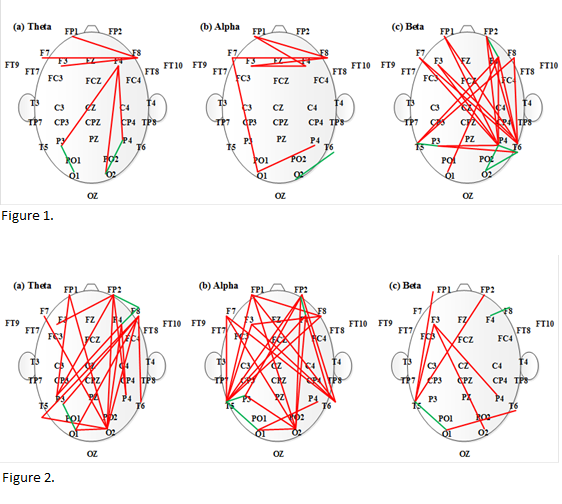