26769
Emotional Face Processing and Spatial Frequency in 10-Month-Old Infants at Risk for Autism.

Objectives: The present research tests whether already at 10 months of age infants at risk of developing ASD (i.e., siblings of a child with ASD) differ from a control group of infants at low risk for ASD (i.e., siblings of a child without ASD). Specifically, we investigated group differences in electrophysiological activations evoked by fearful and neutral faces filtered to contain only local or global information (See Figure 1).

Results: Our analyses focused on typical infant ERP components associated with face processing: N290 and P400. Mean peak amplitudes for each component were entered in a 2 (fear; neutral) by 2 (detailed; global) ANOVA, with group-membership as a between-subjects variable. Preliminary results show that the groups differ significantly on the amplitudes for both ERP components (p < .05), with the high-risk group having smaller amplitudes compared to the low-risk group. No other significant effects were found (all p > .10).

Conclusions: Our preliminary results show no differences between high and low-risk 10-month-olds in emotion discrimination or in the processing of detailed vs. global information, which suggests that this visual processing starts to deviate later on in development. However, we found that overall the high-risk group has a reduced cortical response to facial stimuli compared to low-risk infants. This could indicate that atypical face perception is an endophenotype of ASD. Possibly, in infants later diagnosed with ASD this impairment develops into atypical emotion discrimination that was reported in toddlers. 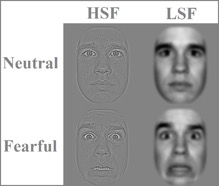