Best practice diagnostic assessment of children suspected of having autism spectrum disorder (ASD) includes cognitive testing; psychometrically strong cognitive measures are also indispensable in longitudinal research. Assessment of cognition in ASD is complicated by variable skill levels and uneven profiles of strengths and weaknesses, as well as inherent social communication differences. Few tests have been validated for use with this population. The Merrill-Palmer-Revised Scales of Development (M-P-R) is a standardized cognitive assessment that is well-validated and reliable for use with typically developing preschoolers. However, the suitability of the M-P-R for assessing cognition in children with ASD has not been well-researched.

The current study’s aim was to investigate the criterion validity of the M-P-R for assessing cognition in a large group of preschoolers with ASD whose abilities span a broad range of intellectual functioning.

Participants (N = 391; 84% male; Mage = 41.25 months) were drawn from an ongoing multi-site longitudinal study examining the development of children with ASD (Pathways in ASD study, Szatmari et al., 2015). Bayesian analytic methods were used to assess the criterion validity of the M-P-R. Standard scores of all Domains and Indices of the M-P-R are reported. Concurrent validity was assessed by calculating the correlation between the Receptive Language domain of the M-P-R to the Auditory Comprehension subscale of the PLS-4. Predictive validity was assessed by calculating the correlation between M-P-R scores and later WISC-4 scores at age 8 or 9. Concurrent validity was further assessed by comparing profiles of cognitive strengths and weaknesses with those previously described (e.g., Coolican, Bryson, & Zwaigenbaum, 2008).

Children in our sample scored below norms on all Domains and the Developmental Index of the M-P-R (see Table 1). The M-P-R Receptive Language domain was strongly positively correlated with the PLS-4 Auditory Comprehension subscale (r = .73). The Cognitive domain of the M-P-R was weakly positively correlated with later WISC-4 scores (r = .37). Cognitive strengths and weaknesses assessed using the M-P-R mirrored those previously described, with children obtaining higher standard scores on the Cognitive (nonverbal): 64, HDI95% [61 – 66] than the Receptive Language domain: 55, HDI95% [52 – 59].

The M-P-R showed good concurrent validity and acceptable predictive validity in a large, well-characterized sample of preschoolers with ASD whose cognitive functioning ranged from severely impaired to above average. The M-P-R shows promise for assessing cognitive abilities in the ASD population. 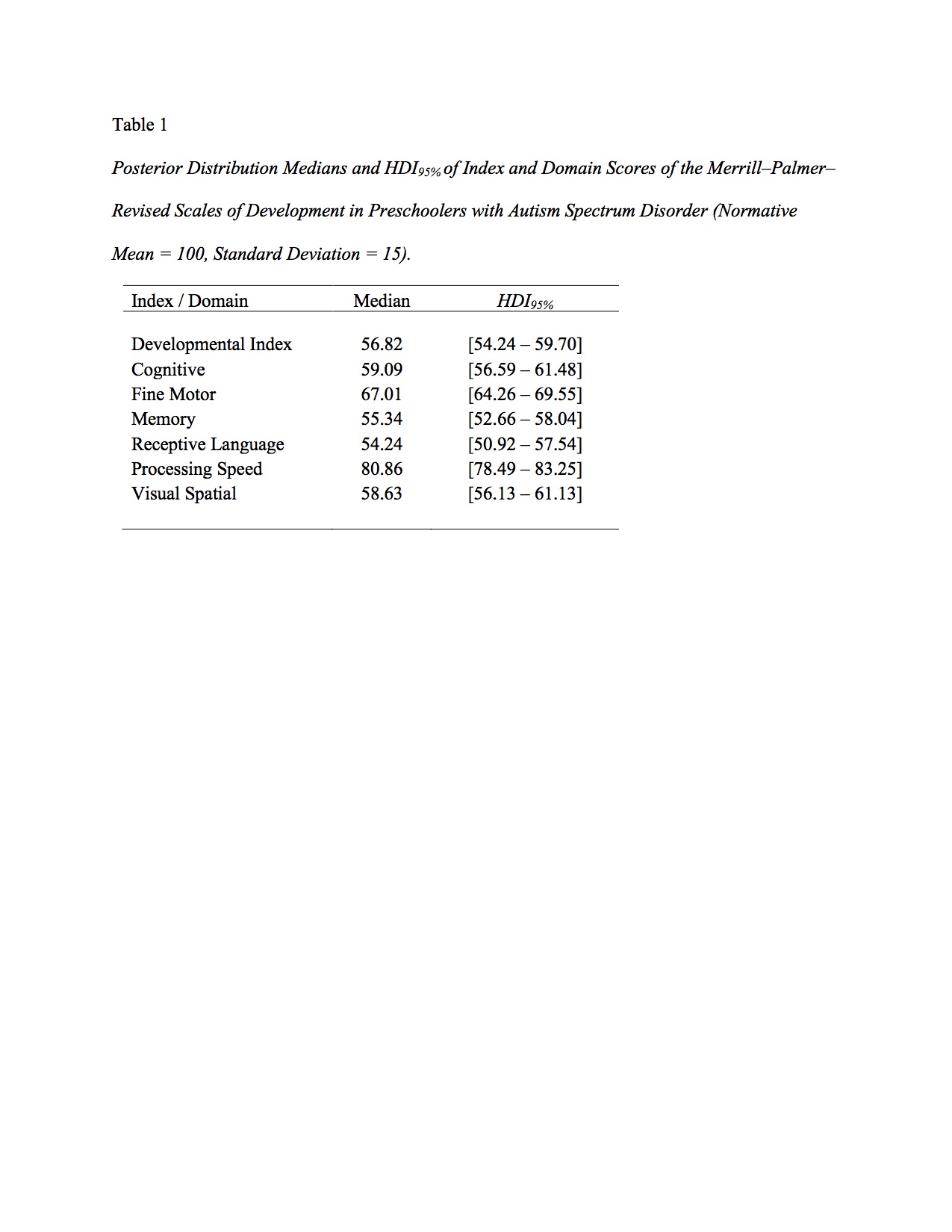