Poster Presentation
Hall Grote Zaal (de Doelen ICC Rotterdam)
Z. Hawks1 and N. Marrus2, (1)Department of Psychological & Brain Sciences, Washington University, St. Louis, MO, (2)Washington University School of Medicine, St. Louis, MO
Background: Previous research has suggested that behavioral comorbidity is the rule rather than the exception in autism. This link between autistic and psychopathologic traits is reinforced by clinical studies indicating that autistic symptom severity is correlated with the severity of non-autistic behavioral impairments and, within families, some of the genetic influences on the causation of ASD have been shown to overlap with genetic influences on other psychiatric conditions of childhood. Critically, research into early developmental factors that contribute to the emergence of autism can guide therapies, as the condition is known to be strongly responsive to early intervention.

Objectives: Our primary aim was to evaluate shared genetic and environmental influences on quantitative autistic traits (QATs) and other early trait-based manifestations of general psychopathology to clarify the developmental origins of their overlap beginning in infancy. To this end, we prospectively examined previously uncharacterized relationships among early precursors of social communication, a core feature of QATs, and psychopathologic traits.

Methods: Social communicative traits (assessed using the Social Communication and Interaction scale from the Video-Referenced Ratings of Reciprocal Social Behavior and the Competence scale from the Brief Infant-Toddler Social and Emotional Assessment; vrRSB SCI and BITSEA Competence, respectively) and early liability for general psychopathology (assessed using the Behavior Problems composite from the BITSEA) were assessed at 18 months of age in 314 twins ascertained from the general population. 222 twins were re-evaluated at 36 months of age, at which point QATs were assessed using the Social Responsiveness Scale (SRS) and internalizing and externalizing behaviors were assessed using the Achenbach Scales of Empirically Based Assessment. Patterns of trait overlap at 18 months were evaluated using correlational analyses, exploratory factor analyses, and hierarchical linear modeling (HLM). HLM was also used to evaluate the predictive utility of 18-month on 36-month traits.

Results: Standardized ratings of variation in social communication (i.e., SCI, Competence) at 18 months were highly heritable and strongly predicted QATs at 36 months. These early indices of autistic liability were independent from contemporaneous ratings of Behavior Problems (Figure 1), which were predominantly environmentally-influenced. Autistic liability did not significantly, incrementally predict CBCL Internalizing or Externalizing scores at 36 months (Figure 2).

Conclusions: We observed that variation in social communication was independent from variation in other domains of general psychopathology and exhibited a distinct genetic structure. This suggests that the commonly-observed comorbidity of specific psychiatric syndromes with autism may arise from subsequent interactions between autistic liability and independent susceptibilities to other psychopathologic traits. Indeed, given that studies in older children have identified shared genetic variance for autistic impairment and symptoms of general psychopathology, these results are consistent with a model of causal overlap in which inherited liability for non-specific psychopathologic symptoms can amplify the severity of autistic syndromes over the course of development. This suggests opportunities for preventive amelioration of their interactions in infancy, perhaps via interventions to target developmentally-independent, behaviorally-modifiable traits that may conspire to exacerbate autistic severity over the course of development. 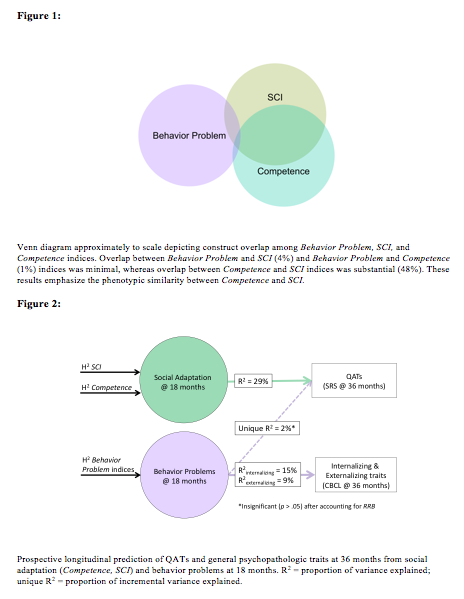