Approximately 40-60% of children with ASD are language delayed, but only 30% remain minimally verbal (MV; Pickles et al., 2014). Preschool expressive abilities, nonverbal cognition, joint attention and motor skills have been shown to predict language development in broad samples including children with and without language delay. There is a need for studies focused on language-delayed children to better understand factors that predict whether or not a child will remain minimally verbal and their language development beyond the preschool years. One challenge to this area of research is the limited availability of longitudinal cohorts with a sufficient number of language-delayed children to examine predictors of longer-term language outcomes.

Methods: Age 3 predictors of young adult language level were explored using CART in the Early Diagnosis cohort (N=125 followed from 2 to 19 years of age). Five Mullen subscales (Gross Motor, Fine Motor [FM], Visual Reception, Expressive Language, and Receptive Language) and two ADOS items (joint attention, motor imitation) were entered as age 3 predictors. Language delayed at 3 and MV at 19 were defined as not yet using phrases on the ADOS. Linear mixed models were then used to examine the effect of CART-identified predictors on Vineland expressive language trajectories from ages 3 to 19 for children not yet using phrases (n=81). Findings were replicated in an independent sample of 361 children followed from 3 to 10 years of age (Pathways) using ADOS language level and the Merrill Palmer FM and cognitive subscales as predictors of Vineland as expressive language trajectories.

Conclusions: Findings from two independent cohorts using different assessment instruments suggest that significantly delayed fine motor skills may be predictive of sustained language impairments in language-delayed preschoolers with ASD. Future studies are needed to better understand the association between fine motor and language impairments. Fine motor skills may be reflective of other child characteristics that interfere with language development (e.g., reduced interest in interacting with objects) or a broader neurological vulnerability. 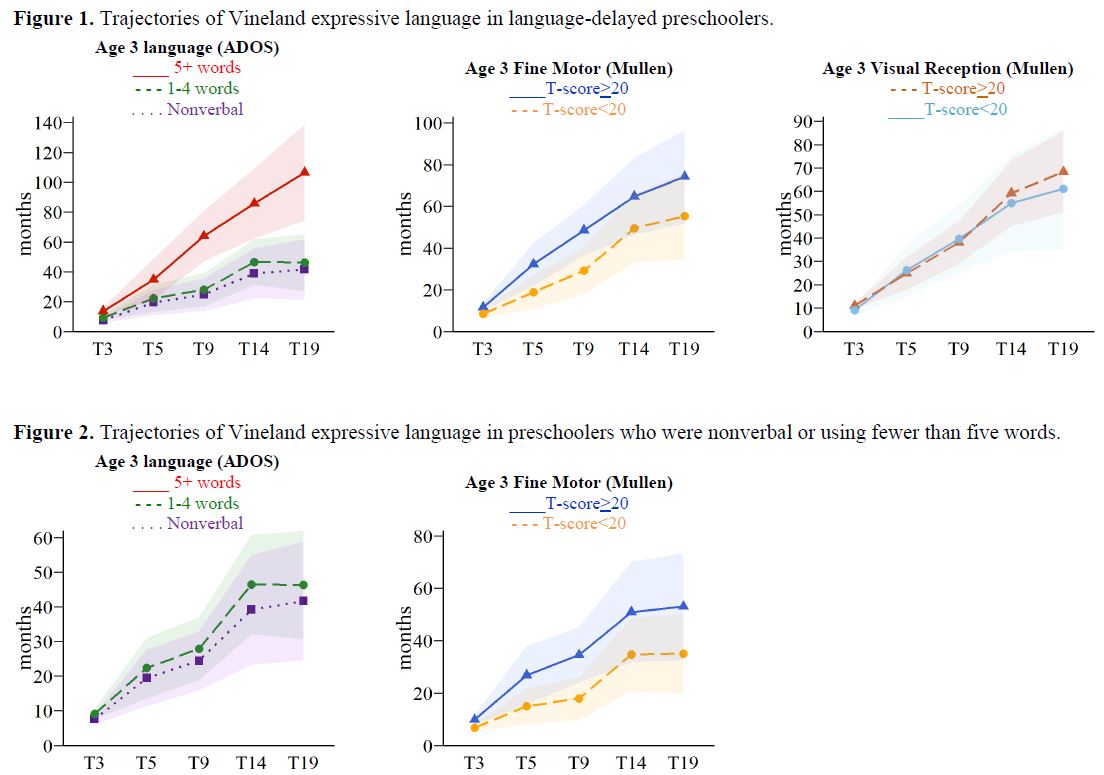