Objectives: The objective of this study was to examine the utility of a novel scale given to parents and teachers to separately measure capability and awareness in several domains for young adults with ASD and related developmental disorders.

Methods: This was an 8-month observational study from October 2016 to May 2017 done at Meristem, a program for young adults with ASD and related neurodevelopmental disabilities in Fair Oaks, California. The Meristem staff and study team developed a 10-item measure, the Meristem Capability and Awareness Scale (MCAS), to assess outcomes in five domains (Practical Work Skills, Spatial Integration, Independent Living Skills, Wellbeing, and Social & Communication Skills), on two subscales (Capability, rated 1-5, and Independence/Awareness, rated 1-10) (Table 1). All students at the school were invited to participate, and all chose to participate (n=29, mean age=21.7). Parents and teachers rated students at baseline (October 2016) and at the end of the study (May 2017). Teachers additionally rated students midway through the school year (January 2016). Parent and teacher MCAS ratings were tested for significant change over time using a linear regression model. Additionally, Pearson’s correlations were calculated for each MCAS domain’s Capability score and Independence/Awareness score.

Conclusions: Despite limitations including a small sample size, short time frame, and lack of comparison with standardized measures, greater improvement on Independence/Awareness than on Capability may indicate that self-awareness of challenges precedes the ability to work on them. Additionally, strong correlations between Independence/Awareness and Capability are an indication of good internal validity and show that scores on the two subscales may move together. However, correlations show enough difference between the subscales to provide evidence that the concepts of capability and awareness are distinct and may merit individual measurement. These findings support the use of a specialized awareness scale in outcome measurement for people with developmental disabilities. Such a scale may capture important change and should be considered in the development of future outcome measures. 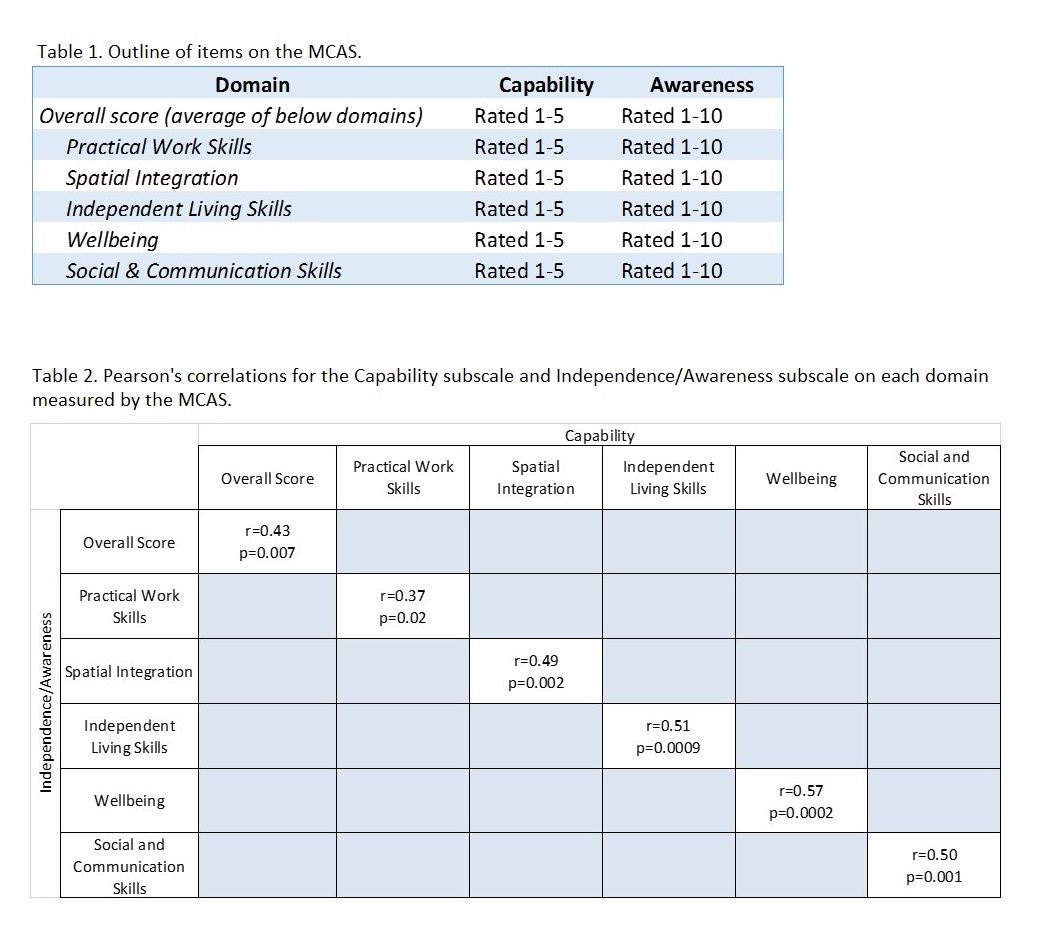