27061
Synchrony at 15 Months, Children’s Risk Status, and the Relationship to Later Language Ability at 24 Months.

Oral Presentation
Jurriaanse Zaal (de Doelen ICC Rotterdam)
H. L. Fipp-Rosenfield1, A. C. Dowd2, B. G. Davidson3 and A. R. Neal-Beevers2, (1)Communication Sciences and Disorders, Northwestern University, Evanston, IL, (2)The University of Texas at Austin, Austin, TX, (3)Pediatrics, University of Miami Miller School of Medicine, Miami, FL
Background: Synchrony is defined as the degree to which parent nonverbal and verbal communication follows their child’s focus of attention and action during play (Siller & Sigman, 2002). It has been established that early synchrony in the mother-infant dyad plays a supportive developmental role in later language and communication abilities (Yirmiya et al., 2006). It has also been observed that the use of gesture in the mother-infant dyad has a positive influence on infants’ later language abilities (Iverson et al. 2005). However, it is unclear how these developmental relationships vary across children at high-risk (HR) and low-risk (LR) for autism spectrum disorders (ASD).

Objectives: In this study, we hypothesized that mother-infant synchrony at 15 months would be positively associated with 24-month vocabulary scores. We also hypothesized an interaction between synchrony and risk, such that the influence of synchrony on vocabulary development will be weaker in HR infants.

Results: Hierarchical regression equations were used to predict language from: (1) gender (2) risk status, (2) synchrony and (3) risk by synchrony interaction. Separate regression equations were conducted for each language outcome and each synchrony predictor (see Table 1). Results of the regression analyses revealed that the model using MS2 to predict the number of words reported on the MCDI (MCDI_Number) approached significance and the model using MS3 to predict MCDI_Number was significant, accounting for 27% and 33% of the variance in MCDI_Number, respectively. In both models, gender was a significant predictor such that being female predicted higher MCDI_Number. Furthermore, MS3 predicted higher MCDI_Number. A marginally significant interaction suggested that the predictive relationship between MS3 and MCDI_Number was stronger for LR infants. Similar direction interactions were observed in other models, although none were statistically significant (see Figure 1).

Conclusions: Preliminary data from this prospective study support previous findings linking stronger mother-infant synchrony to enhanced language development. Specifically, we found that infants who were female and whose mother-infant interaction was characterized by greater verbal synchrony at 15 months had larger expressive vocabularies at 24 months. These preliminary findings also point to a possible interaction between verbal synchrony and risk status, such that the relation between synchrony and expressive language appears stronger for LR compared to HR infants. 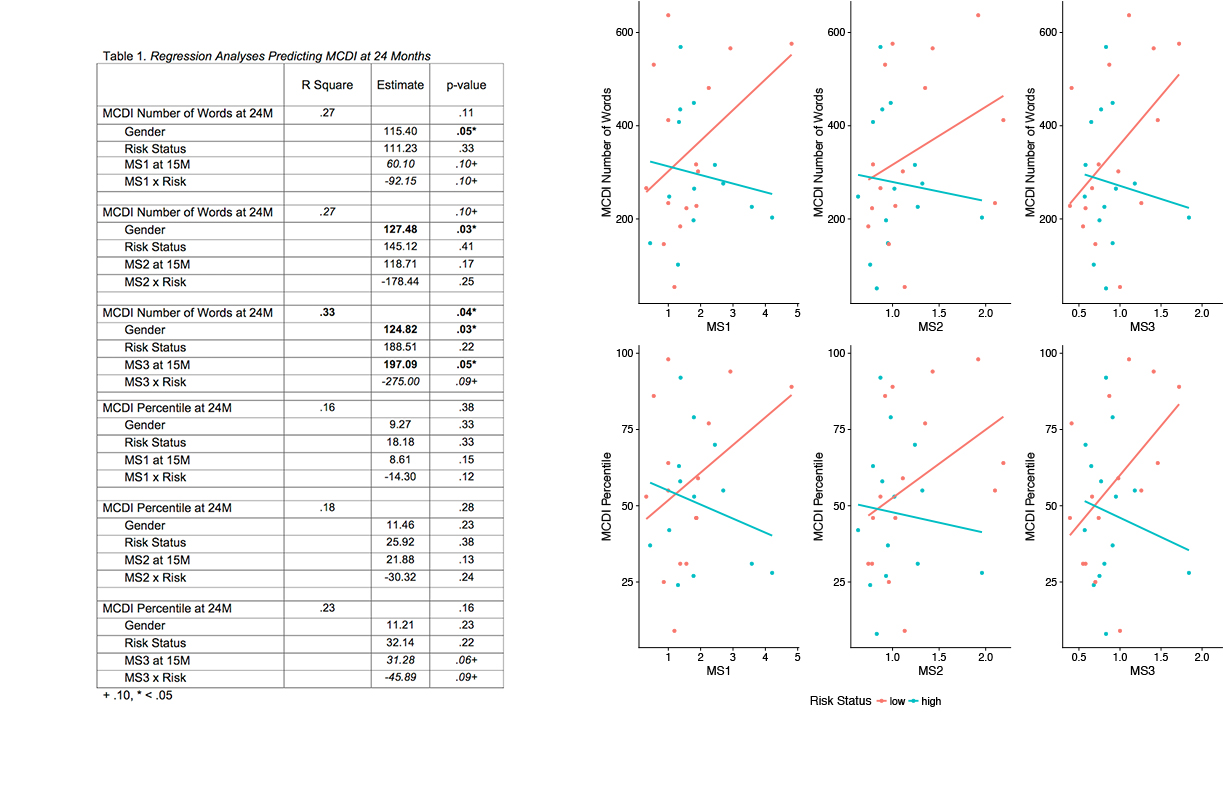