Individuals with Autism Spectrum Disorder (ASD) exhibit reduced interest in social stimuli and biological motions (e.g., Klin et al., 2009). Meanwhile, they have also been reported, mainly based on parent report and clinical observations, to show excessive visual attention to repetitive movements (e.g., the rotating wheels, Leekam et al., 2011). However, the visual preference to repetitive and biological movements has rarely been compared within one paradigm.

In this study, we attempted to measure ASD children’s visual preferences to repetitive and biological movements using a preferential looking paradigm. By carefully matching the properties of stimuli (e.g., color and shape), we aimed to investigate the preferences of children with ASD to the movements (repetitive, biological, and random) per se.

We adapted the Social Attribution Task (SAT, Heider & Simmel, 1944), in which typical developing (TD) people could attribute geometric animation as a social story and perceived the intention enacted by the geometric shapes. The general setting, modified from SAT, was a little triangle moving in a location surrounded by a fence with several breaches. In the biological movements, the little triangle moved as it was trapped in the fence and intended to find an exit, it tried several breaches and succeed eventually. In the repetitive movements or random movements, the little triangle moved along an oval track or in random directions with the same speed.

Twenty-six 5- to 7-year-old high-functioning children with ASD and 22 age- and ability-matched TD peers participated in the experiment. Children were shown a pair of videos (approximately 35 s) selected from the three types of movements randomly. This procedure repeated for 12 trials. Children’s eye-movements were recorded by a Tobii Pro X3-120 eye tracker during the whole experiment.

We found that (a) both group of children preferred the biological movements to random movements, with their BPIs significantly higher than the chance level (50%), see Figure 1; (b) the RPI of the ASD group was marginally higher than chance level, p = .06, while TD group shown no preference to repetitive movements compared to chance level, p > .1; (c) when repetitive movement and biological movement were displayed spontaneously, ASD group spent almost the same time on the two movements, and their RBR was significantly higher than their TD peers (Figure 2). 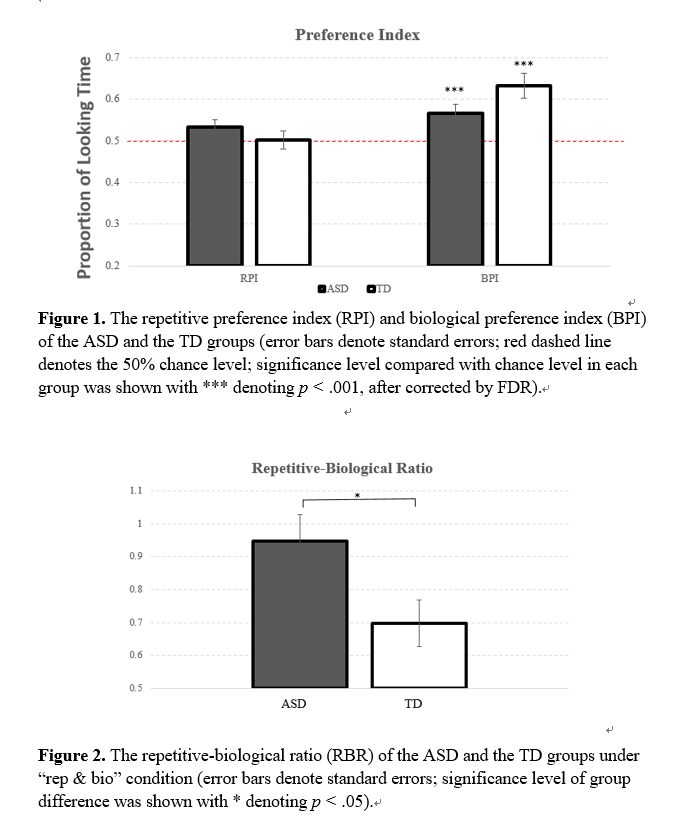