27199
Symptom Severity Trajectories from Infancy to Childhood in Siblings at Risk for Autism Spectrum Disorder: Social Affect and Restricted and Repetitive Behaviors.

Objectives: Here, we aim to define distinct developmental trajectories for ASD symptom severity for the total score and social affect (SA) and restricted/repetitive behaviors (RRB) subdomains of the Autism Diagnostic Observation Schedule (ADOS). Trajectory groups were examined from 1.5 years to 5-7 years of age. Early clinical and cognitive predictors (before 1.5 years of age) will also be determined for each measure

Methods: We used Group Based Trajectory Models (GBTM) to derive early symptom severity trajectory groups for three diagnostic measures: Total, SA and RRB scores from the ADOS at 18, 24, 36-42, and 60-84 months of age. The sample was composed of 502 high-risk siblings (281 males), of whom 128 received an ASD diagnosis at 36 months. Clinical and cognitive measures were also collected before this period (at 6, 12 and 18 months), with respectively the Autism Observational Scale for Infants (AOSI) and the Mullen Scales of Early Learning (MSEL). Predictors and diagnostic membership were examined according to the derived trajectory groups of symptom severity for each of the three diagnostic measures.

Results: Analysis revealed three distinct trajectory groups for the symptom severity Total score and two for each subdomain (SA and RRB). Pairwise comparisons between trajectory groups for quadratic slope estimates revealed significant differences for all comparisons (all p<.001). No significant difference in the intercepts was evidenced between trajectories for the Total score (all p>.24), but there were differences for the two subdomains (all p<0.01). As expected, children with an ASD diagnosis were more likely to be in the trajectory groups with the highest scores on Total, SA and RRB measures. Finally, from 6 months of age, language-related cognitive measures at the MSEL were more predictive of SA trajectory membership, and motor skills at RRB trajectory membership. From 12 months of age, AOSI clinical scores were also highly predictive of severity score trajectory membership for all three diagnostic measures. 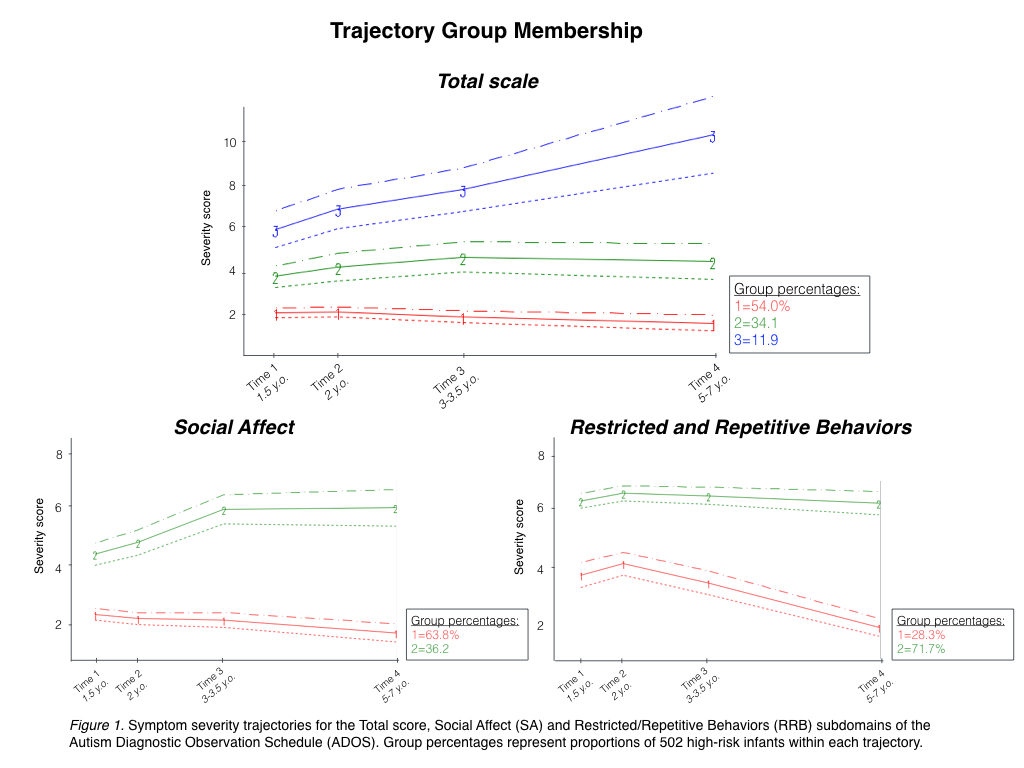