27259
From Genetic Modification to Seizure-Induced Hyperactivity; Insights from SYNGAP1 Zebrafish Models of ASD

This study focuses on Synaptic Ras-GTPase Activating Protein 1 (SYNGAP1), a gene encoding the post-synaptic protein syngap1, known to cause intellectual disability (ID) and Autism in humans. syngap1 is a component of the post synaptic density of glutamatergic synapses and plays an important role in receptor trafficking and synaptic strengthening allied with learning and memory. In our lab, we have generated a stable syngap1ab zebrafish models of Autism using CRISPR/Cas 9 genome editing. High conservation of syngap1 between humans and zebrafish make it a favorable model to study the mechanisms underlying neuro-developmental and behavioral phenotypes associated with ASD.

Objectives: Using syngap1 zebrafish models of ASD our aims are, (i) To identify and quantify comparable ASD-related behaviors and, (ii) To delineate the molecular mechanisms underlying those behaviors in zebrafish larvae to gain insight to symptom etiology in humans with SYNGAP1 variants.

Methods: syngap1 models of ASD were generated using the CRISPR/ Cas 9 genome editing method by injecting SYNGAP1A and SYNGAP1B gene specific guide RNA, and Cas 9 nuclease into zebrafish embryos at one cell stage. Resulting embryos were reared, screened for the SYNGAP1 gene mutations, and were used in the subsequent behavioral assays. To study the light-induced hyperactivity and epilepsy, a visual-motor response assay was carried out using syngap1 and wild-type (WT) larvae from 4, 5 and 6 days post fertilization (dpf). The activity of each zebrafish larva was recorded in terms of their center point movement using the Noldus- DanioVisionTM high throughput tracking software. Larvae were exposed to 30 minutes of alternating light-dark cycles for a duration of 4 hours. Cumulative duration of movement for each larva was recorded and analyzed over time.

Results: Our preliminary data suggest that there are significantly higher levels of activity associated with the syngap1ab mutants compared to the WT larvae, during both light and dark periods. These observations are comparable with the intractable seizures associated with SYNGAP1 variants in humans. Moreover, larvae with syngap1ab -,- /+,- genetic composition had the highest activity levels compared to the syngap1ab-,-/-,- and syngap1ab +,+/+,+ (WT) combinations recapitulating the similar phenotype in human syngap1 +,- mutations.

Conclusions: Given our preliminary data, syngap1 zebrafish models of ASD can potentially be used to address the behavioral phenotypes and understand the underlying molecular mechanisms linked to ASD. Identifying these machinery will be useful in the future to develop therapeutic strategies. 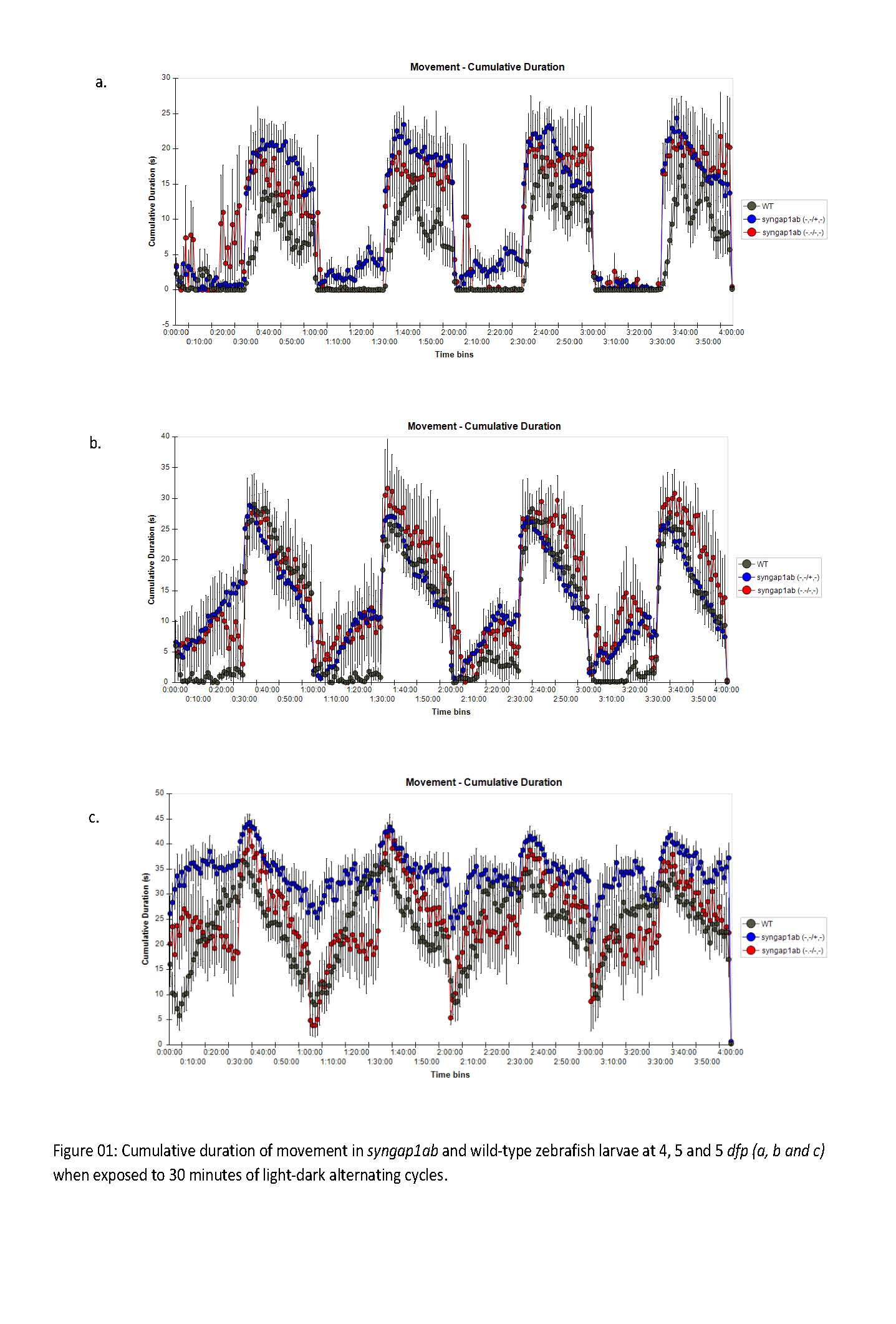