Autism spectrum disorder (ASD) is a kind of generalized neurodevelopmental disorder. Except the environment factors, the genetic causes also have a vital role in ASD.Although numerous ASD genes have been discovered during the last two decades, for many of them the molecular mechanism via which they contribute to the ASD phenotype remains unknown. In our study, we found that the ASD patients have the elevated copy number of HUWE1 gene suggesting that the increased gene dosage of HUWE1 was associated with ASD. In addition, the animal model experiment showed that over-expression HUWE1 could increase the expression of Lef1, ccnd1 and c-myc, which suggested that HUWE1 could regulate the development of the nervous system through the Wnt pathway. Taken together, Our study provides the potential of HUWE1 copy number variants in occurrence of ASD via HUWE1-mediated Wnt signaling.

This study focused on whether the copy number variants of HUWE1 gene is associated with autism spectrum disorder (ASD).

We investigated the copy number of HUWE1 gene of 67 ASD patients and 74 normal controls by RT-PCR. Zebrafish embryos were injected with synthesis RNA of HECT structure domain with 4 gradients (50ng/ul,40 ng/ul,30ng/ul, 20ng/ul). RT-PCR was used to detected the different expression of Lef1, ccnd1 and c-myc of zebrafish embryos in experimental group and control group.

We detected the 6 (6/67) persons with elevated copy number of HUWE1 gene in the patients and all the controls with the normal copy number (X2 = 6.921, P < 0.05). The result of RNA injected zebrafish embryos was that the development of the nervous system of 123 cases (56%) were affected in the experimental group and 10 cases (12%) had the abnormal development of the nervous system in the control group (X2 = 48.128, P < 0.01). The expression of Lef1, ccnd1 and c-myc in RNA injected zebrafish embryos was significantly higher than the control (p<0.05).

The increased of the copy number of HUWE1 gene may be a pathogenic factor in ASD.The over-expression of HUWE1 could affect the development of the nervous system of zebrafish embryos by increasing the expression of the relative proteins of wnt pathway. The findings strongly support that the copy number variants of HUWE1 gene has the potential to be a novel detecting target in the etiological diagnosis of ASD. 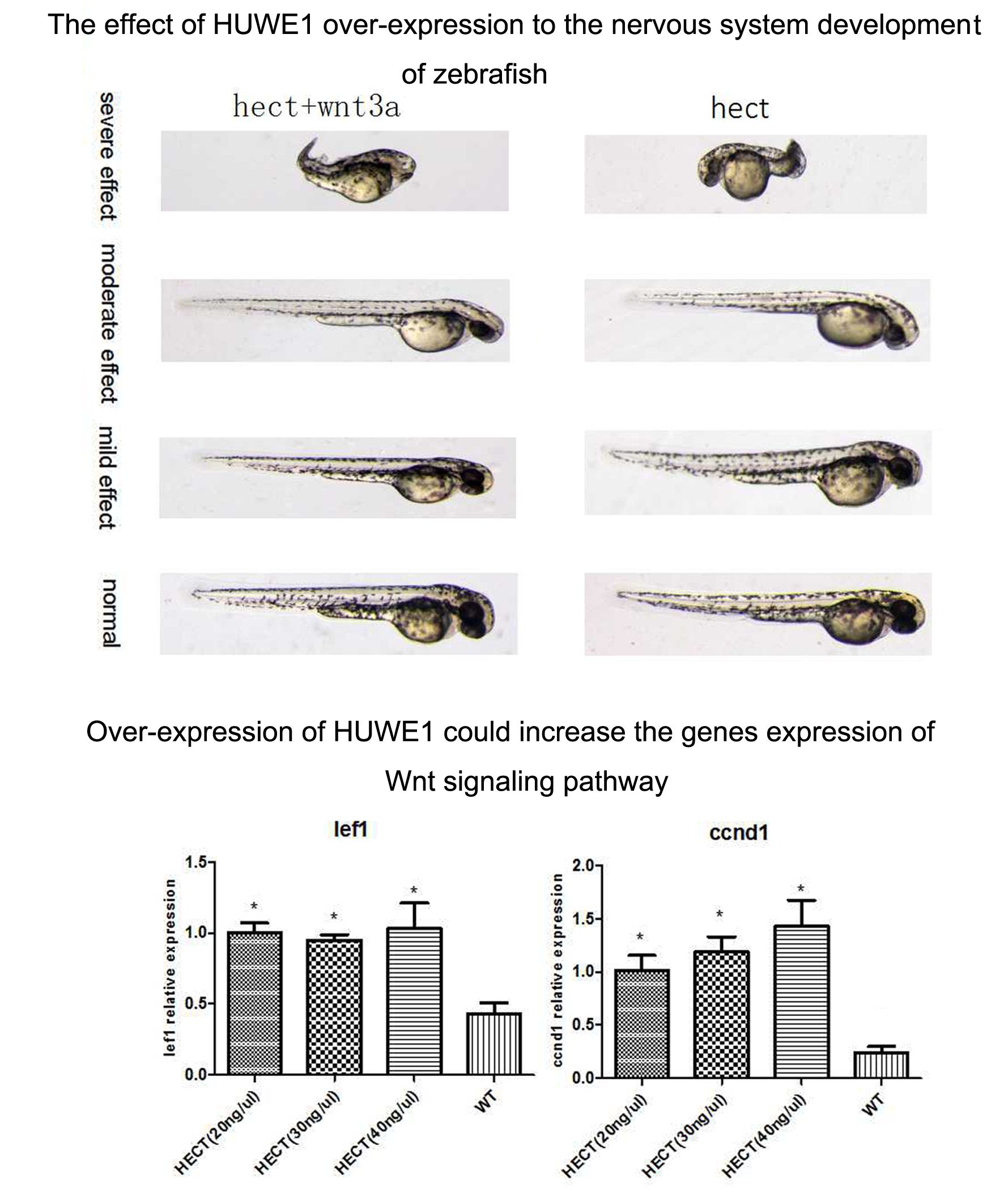