Poster Presentation
Hall Grote Zaal (de Doelen ICC Rotterdam)
S. Schwartz and B. S. Hadad, University of Haifa, Haifa, Israel
Background: Over development, the perceptual system becomes more efficient and specialized for the stimuli at hand in its close environment. This perceptual narrowing is a fundamental process, emerging already in infancy for several types of stimulation, such as faces, language, and music. Specifically, for faces, advantage is seen for processing faces from one's own race, over faces from other races. Despite the adaptive value of this narrowing in perception, recent evidence implies for reduced narrowing in individuals with ASD. The findings, however, are inconsistent, in particular for faces.

Objectives: Our research purpose was to explore other-race effect (ORE) in autism, looking for both quantitative differences in the magnitude of the effect, and for qualitative differences in the way own-race versus other-race faces are processed. We hypothesized that individuals with ASD would exhibit (a) lower processing advantage for own-race faces, and (b) comparable inversion effect for own- and other-race faces, indicating similar type of processing for the two races and reduced specialization to the more frequent faces.

Methods: Participants (24 TD and 19 high-functioning ASD adults) were simultaneously presented with two faces and were asked to indicate whether the two faces were same or different (see Figure 1). Discrimination was tested for each face race (Caucasian vs. Asian) on separate blocks. Within each race, morphed faces were created to manipulate discrimination difficulty, and orientation was manipulated to examine inversion effect.

Quantitative differences in ORE: The results for the upright faces showed that although ORE was exhibited for both groups, it was smaller for the ASD group [F(1,42)=7.32, p<0.009]. As can be seen in Fig. 2, this pattern resulted specifically from the reduced specialization to the own-race faces in the ASD group.

This pattern of results was obtained for the relatively easier morph levels but did not reach significance for the more difficult morph levels (20% and 40%), presumably because of an overall extremely low performance under these conditions.

Conclusions: The present data suggests that contrary to prevailing views, perceptual discrimination of faces is overall weaker in ASD compared to TD individuals, and demonstrates lower sensitivity to orientation effects. But more importantly, the data indicates that the perceptual system in autism does not become specialized, to the same extent seen in typicals, in processing the more frequent faces it encounters. 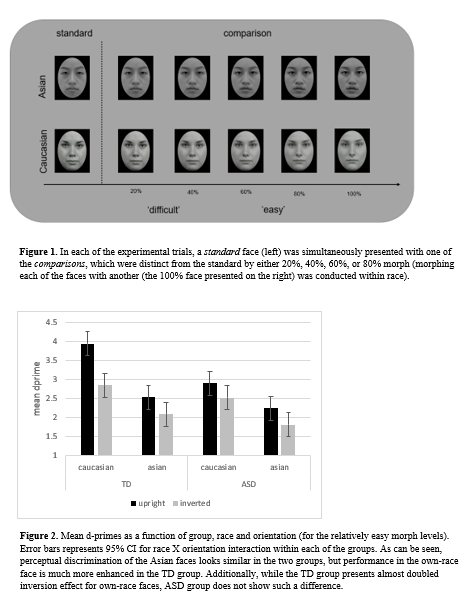