27404
Measuring Dyspraxia in Autism with a Brief Praxis Exam

Individuals with ASD are now known to exhibit a wide array of motor differences. Over the past decade-plus, deficits in praxis have been robustly demonstrated and replicated in ASD. Praxis refers to the ability to perform learned skills movements, such as using tools or producing familiar symbolic gestures. A widely used measure of praxis, the Florida Apraxia Battery, typically takes 20-30 minutes to administer, and up to twice as long to score, limiting the feasibility of including it in multi-dimensional studies of ASD.

To test whether well-established deficits in praxis could be demonstrated using a brief (5-minute) measure.

Participants with ASD made far more errors on the task (M=11.53, SD=6.01) than did controls (M=6.41, SD= 2.09), p<.001, d=1.32, a reliable effect with a large effect size. Although participants with ASD performed worse on each individual subtest (Figure 1), there was no interaction between group and subtest (p=.29, η2=.08), suggesting that both groups responded to the four subtests similarly. A significant interaction between group and error type (p=.01, η2=.23) revealed that participants with ASD were more likely to make spatial and temporal errors specifically, compared to controls (Figure 2). Individual differences analyses revealed that better praxis performance was associated with higher IQ in the TDC group (r=.521, p=.032), and with older age (r=.374, p=.029) and lower ADOS scores (r=-.318, p=.072) in the ASD group.

These preliminary results demonstrate that known weaknesses in praxis performance in ASD can be replicated using a significantly shortened version of a praxis exam. Using this abbreviated battery, individuals with ASD made more errors across all four sections of the battery relative to those in the typically developing group. Additionally, individuals with ASD were more susceptible to certain error types than others, specifically spatial and temporal errors. These findings are largely consistent with studies using the full battery (e.g., Mostofsky et. al, 2006), suggesting that a shortened battery may have sufficient sensitivity to observe group differences in praxis performance. The ability to measure praxis efficiently will increase the feasibility of including it as part of larger batteries aimed at testing the relationship between praxis and hypothesized downstream skills (e.g., social communication). 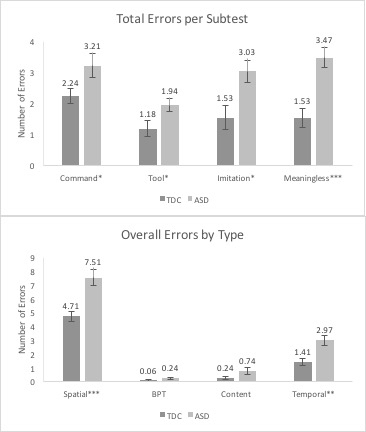