Poster Presentation
Hall Grote Zaal (de Doelen ICC Rotterdam)
G. Kadlaskar1, B. Keehn1, A. Seidl1, H. Tager-Flusberg2 and C. A. Nelson3, (1)Speech, Language, and Hearing Sciences, Purdue University, West Lafayette, IN, (2)Psychological and Brain Sciences, Boston University, Boston, MA, (3)Boston Children's Hospital, Boston, MA
Background: A significant majority of individuals with autism spectrum disorder (ASD) experience hypo-and/or hyper-sensitivity in one or more sensory modalities, which have been linked with deficits in social communication and adaptive behavior. Touch is an important communicative signal, which forms the basis of early caregiver-child interactions and facilitates social communication and language processing in early development. Typically developing infants can use tactile cues to find linguistic units in continuous speech. For example, a touch on a foot while hearing the word “foot” may help infants form word-to-world mappings. Thus, touch may be an essential element aiding in early speech processing, since, when integrated with speech it could be informative as to the linguistic structure. Early aberrant responses to tactile stimulation in ASD, therefore, could impact the language development.

Objectives: To examine orienting frequency and latency to caregiver-initiated touch in 12-month-old infants at high risk for autism (HRA) that did (HRA+) and did not (HRA-) meet later diagnostic criteria for ASD compared to low-risk comparison (LRC-) infants, and the association between touch responsivity and language outcomes at 24 and 36 months.

Methods: To date, we have examined 30 (HRA+=10; HRA-=10; LRC=10), ten-minute videos of caregiver-infant interactions that were recorded during naturalistic play sessions. Trained coders, blind to group membership, evaluated the frequency, type, and location of caregiver-initiated touches to infants during play interactions (e.g., tap on the leg with or without a toy) along with infants’ looking behaviors before, during and after each touch. Infants’ looking behaviors were coded as ‘touch related’ (e.g., infant shifts attention to caregiver, touch-related toy, or touch location), ‘non-touch related’ (e.g. infant shifts attention to non-touch related object or location) and ‘no shift’ (e.g., no attentional shift).

Results: Preliminary analyses showed no significant differences in the frequency of caregiver touches delivered to infants in all three groups. Analysis of variance indicated marginally significant differences in the percentage of no-shift responses to caregiver touches between groups. Follow-up independent samples t-tests showed that the HRA+ infants had a greater percentage of no-shift responses to caregiver touches (67.1%) compared to HRA- infants (48.4%, p=.044) but not LRC- infants (56.9%, p=.191). In addition, for all infants, latency of touch-related attentional shifts was negatively correlated with verbal developmental quotient (DQ) scores, as measured by the Mullen Scales of Early Learning, at 36 months but not at 24 months (see Figure 1).

Conclusions: Our preliminary findings suggest that infants that go on to receive a diagnosis of ASD may more frequently fail to shift their attention in response to caregiver touch. These findings are in agreement with prior reports of ‘sticky attention’ in HRA infants in response to visual cues, and suggest that infants later diagnosed with ASD may show impaired disengagement of attention in response to tactile stimulation. Furthermore, faster orienting to touch was associated with better verbal DQ scores at 36 months, suggesting that touch may be instrumental in early infant language learning. 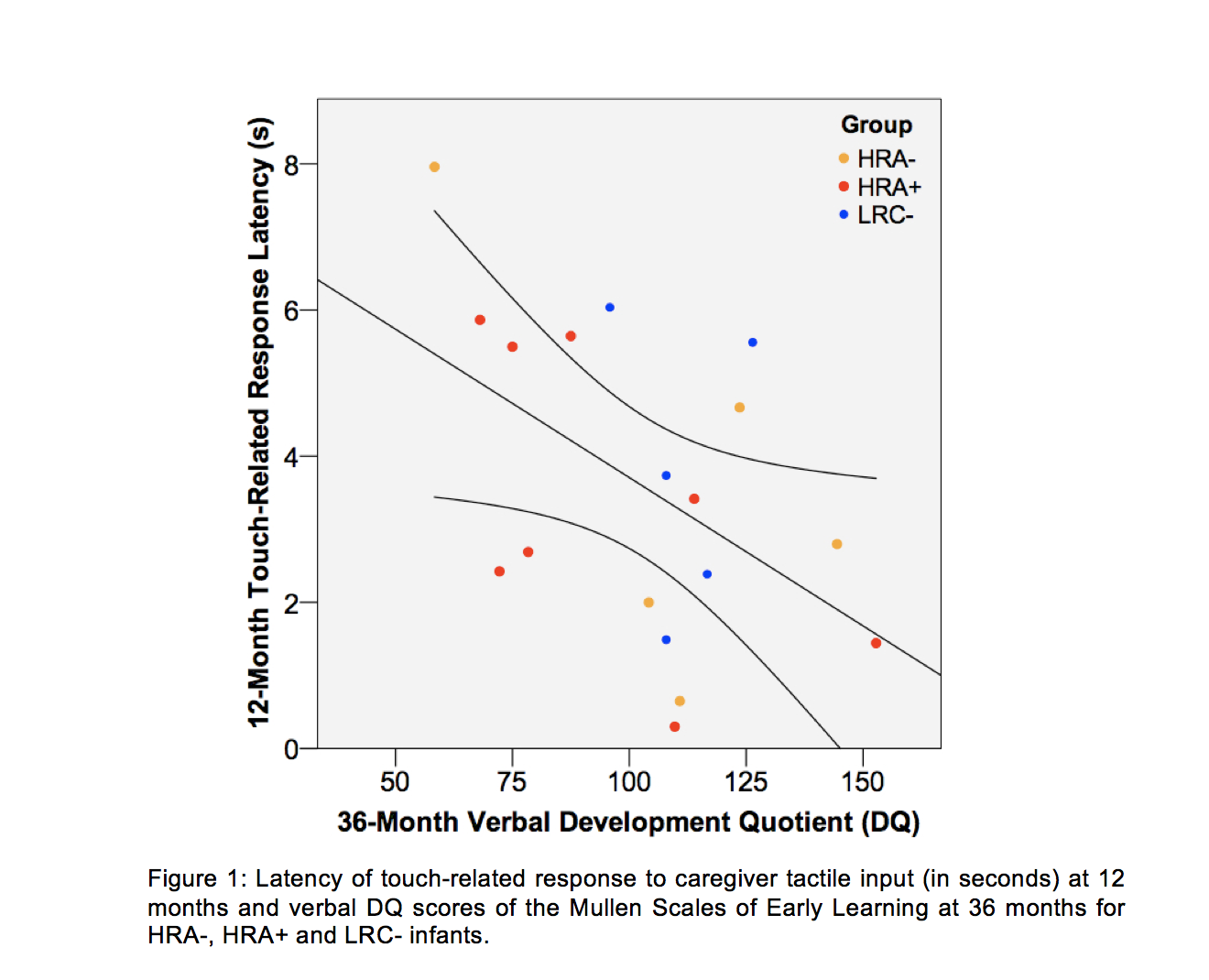