Objectives: To compare parent satisfaction, parental self-efficacy, and level of family stress for parents of preschool children with ASD, served by two publicly-funded province-wide EIBI programs, over the duration of intervention.

Methods: Data were collected at intervention onset (T1) from 269 parents from Province A and 367 parents from Province B. The programs differ in several ways. In global terms, program A adheres to a naturalistic, less-intensive model with a focus on parent training, whereas program B is similar to more conventional community-based EIBI. Parents completed a questionnaire measuring parenting self-efficacy in the areas of communication and social skills, daily living skills, and challenging behaviour, as well as a single-item measure of stress/crisis level at T1, after one year of intervention (T2) and at school entry (T3). Parents also completed a satisfaction survey at T2 and T3.

Results: Controlling for T1 self-efficacy (higher in Province A), parental self-efficacy increased similarly in all 3 domains from T1 to T2 for both provinces (see Table 1). In Province A, this improvement was maintained from T2 to T3 for Communication/Social Skills and Daily Living Skills. Self-efficacy for Challenging Behaviour declined from T2 to T3, but not to T1 levels. Responses at T3 for Province B were insufficient to include in longitudinal analyses. Family stress/crisis level decreased from T1 to T2 (F(1,131) = 16.28, p < 0.001) with no differences between provinces. Results suggest parents were experiencing some difficulties/stress but were coping. Parents were generally satisfied with both EIBI programs. Responses across provinces were compared at T2 (see Table 2). Although response patterns were similar, parents in Province A reported more satisfaction with the location of services, their child’s team’s coordination with other services and support of parent involvement, their learning of helpful strategies, and the high quality of treatment. Satisfaction remained stable from T2 to T3 in Province B; Province A did not provide EIBI services between T2 and T3.

Conclusions: EIBI programs have a positive impact on families. This is true even when programs differ in key aspects including intensity, range of intervention techniques employed, duration, and service delivery model. Although only Province A specifically used a parent training model, parents from both provinces increased similarly in self-efficacy and decreased similarly in relation to stress/crisis. Some differences in parent satisfaction, favouring Province A, suggest that focusing on, and involving, parents may increase family satisfaction. 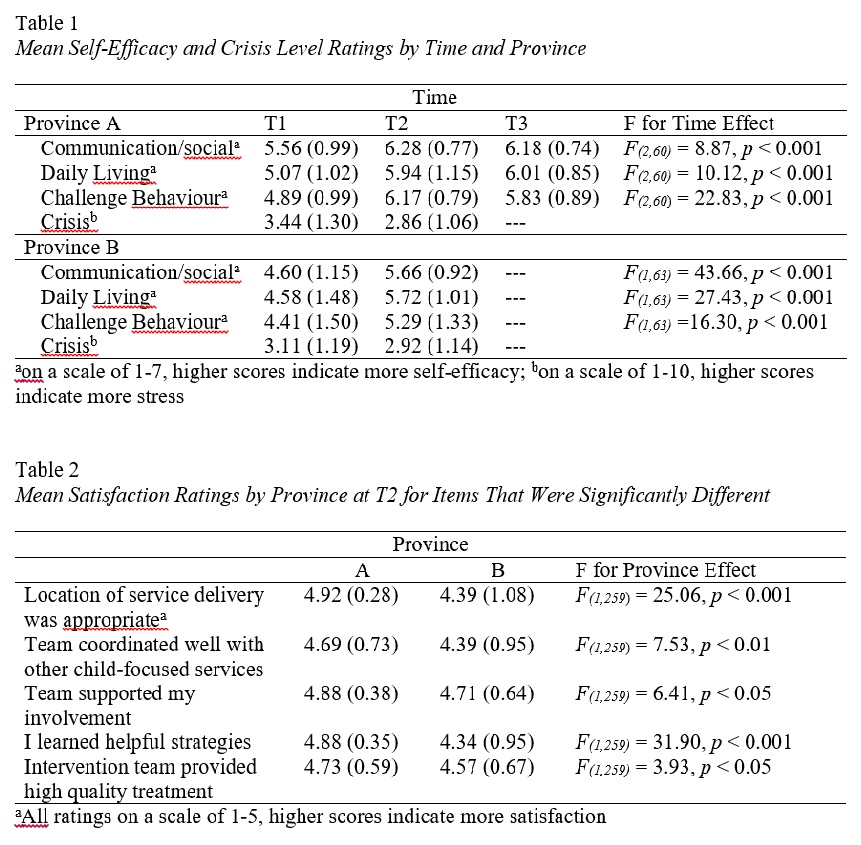