27585
Challenging Behavior in Preschoolers with ASD

While there is much literature on CBs with school-aged children and youth (Lecavalier et al, 2006), there is less on preschoolers, particularly those with low rates of communication. These children may be at high risk of exhibiting CBs due to difficulty communicating their wants and needs. Additionally, much of the existing research is cross-sectional, with few examining CBs longitudinally.

At entry and exit, parents completed the Home Situations Questionnaire-PDD (HSQ, 25 items), which assesses behavioral noncompliance in everyday settings. Parents were asked to endorse whether their child exhibited noncompliance in a range of situations (e.g., when transitioning between activities). Parents were also asked to rate the severity of their child’s behavior for endorsed items (1=mild to 9=severe). In addition to total scores, subscores were calculated for the number and severity of socially inflexible vs. demand-specific CBs (Pelletier et al, 2006). Socially inflexible CBs included situations where children exhibited low adaptability to non-routine situations, while demand-specific CBs occurred when direct demands were placed on the child.

Teachers completed the School Situations Questionnaire (SSQ, 9 items), which is the HSQ analogue for school contexts (e.g., during free-play time in class). Total number of CBs and severity scores were calculated for entry and exit.

Table 1 includes descriptives for the number and severity of CBs reported by parents and teachers. HSQ and SSQ scores were not correlated.

Parents and teachers both reported decreases in CB severity over time. Additionally, the decrease in children’s CB at home was clinically significant, with fewer children scoring at elevated levels by exit.

This study confirms that CB is prevalent in preschoolers with ASD and limited language, but shows that CB decreases while children are in intervention to improve their communication. 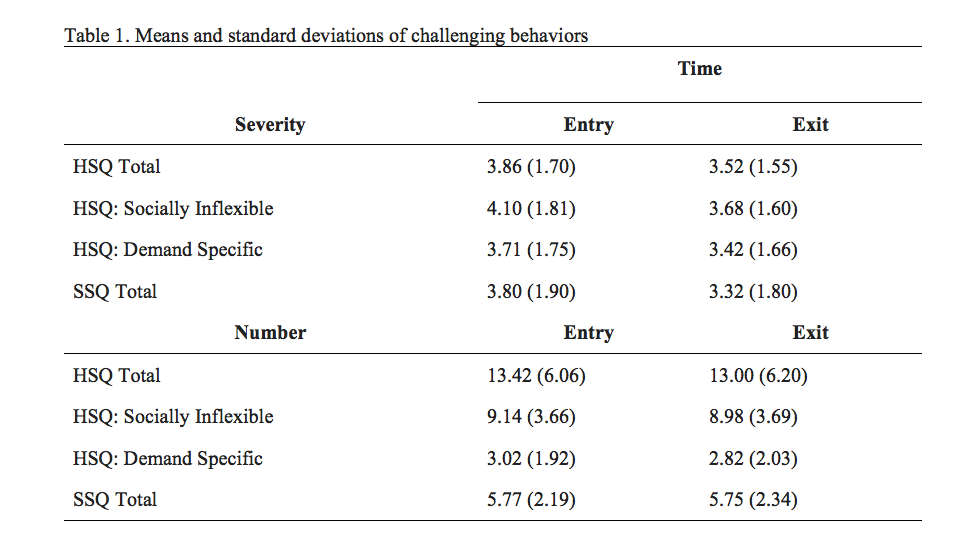