Oral Presentation
Arcadis Zaal (de Doelen ICC Rotterdam)
A. Siddiqua, E. Duku and M. Janus, McMaster University, Hamilton, ON, Canada
Background: The presence of socioeconomic disparities in children’s health, known as the socioeconomic gradient, is well established and there has been some research exploring the relationship between socioeconomic status (SES) and prevalence of Autism Spectrum Disorder (ASD). While there is mixed evidence regarding the association between individual-level SES and prevalence of ASD, the association between neighbourhood-level SES and prevalence of ASD remains largely unexplored. Nonetheless, regional differences in ASD prevalence are well established – it is possible that children who are otherwise similar but live in different areas receive ASD diagnosis at different ages, not due to their individual characteristics, but to characteristics of the regions they live in. This may be the case in Canadian jurisdictions, where the process of diagnosis of ASD may vary across different health regions depending on the available resources.

Objectives: (1) To examine the association between neighbourhood SES and prevalence of kindergarten-aged children with ASD in Canadian provinces and territories, and (2) to determine the strength of this association across health regions in each province/territory, which represent clusters of neighbourhoods in each jurisdiction.

Methods: This project will use data from a large, population-wide database of child development in kindergarten, measured with the Early Development Instrument (EDI). The EDI is completed by kindergarten teachers, includes records of childhood health disorders and diagnoses, and has been administered at the population level in most Canadian provinces and territories. The EDI data for children with ASD have been merged at the neighbourhood level with close to 2000 SES variables (e.g. neighbourhood SES, rural/urban) from the Canadian 2006 Census, the 2011 National Household Survey, and 2005 and 2010 Taxfiler data. An SES index has been created using principal component analysis and includes a subset of 10 variables. Since the EDI has included information on children’s medical diagnosis from 2010 and variables from the Canadian 2006 Census were used to construct the SES index, EDI data collected in 2010 – if available – were considered the most relevant. However, EDI data were not available in all provinces in 2010, thus those collected closest to 2010 for each province and territory will be used (Table 1). Multilevel modeling will be applied to examine associations between the SES index and prevalence of ASD at the neighbourhood and health region levels for each province/territory.

Conclusions: Findings of this project will contribute meaningfully to the understanding of the relationship between neighbourhood-level SES and prevalence of children with ASD, as well as facilitate customized service planning according to different needs of jurisdictions. From a public health planning perspective, this is a pragmatic first step for reducing socioeconomic inequalities in health of children with ASD in different areas. 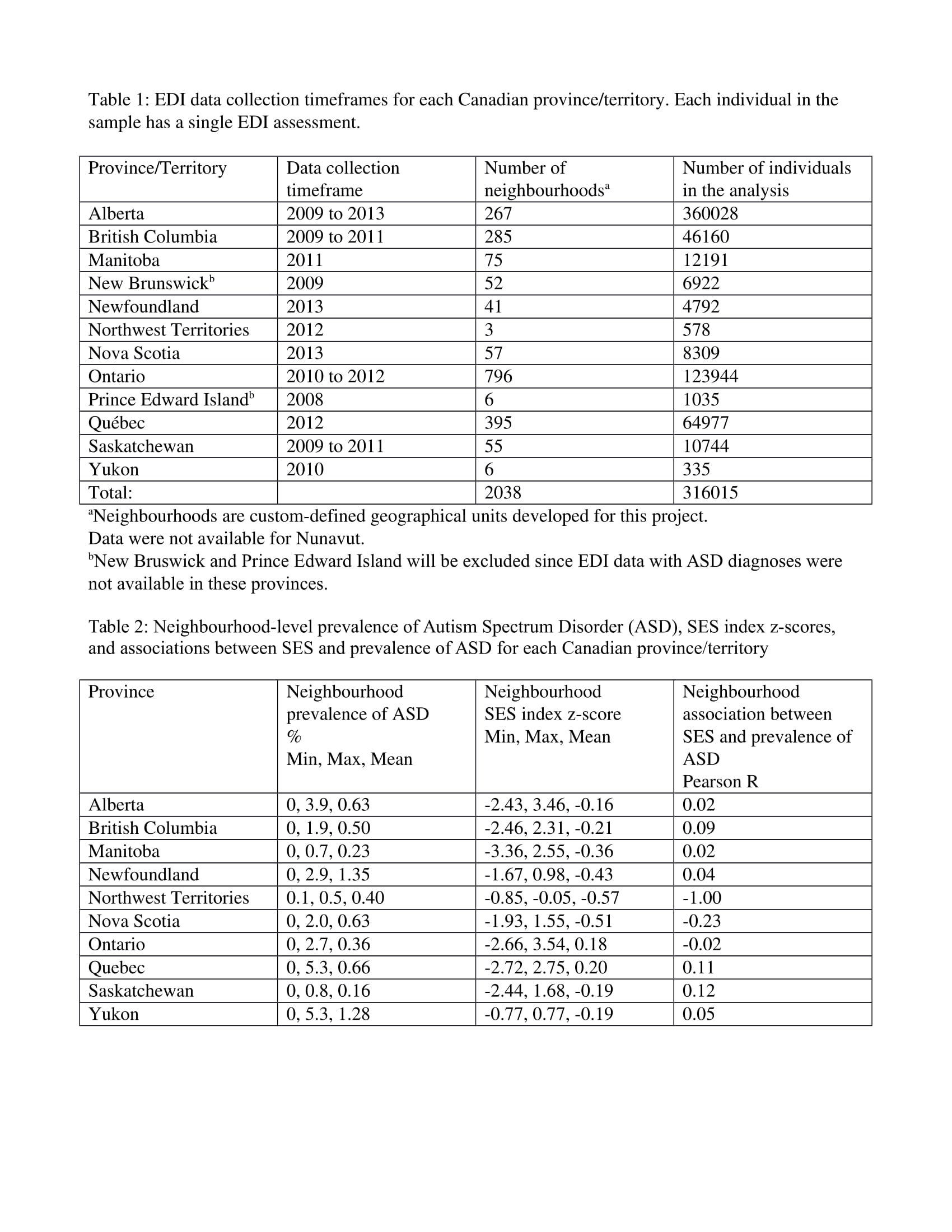