High rates of co-occurring psychiatric disorders have been reported in older children, adolescents and adults with autism spectrum disorder (ASD). Recent studies have also shown high rates of emotional and behavioural problems (EBPs) in younger children with ASD. Early identification of comorbid problems is crucial in the management of ASD, especially given that the impact of many of these problems can often be reduced using evidence-based interventions. Psychiatric problems have been shown to persist in older children with ASD, but far less is known about the stability of EBPs in young children with ASD.

To assess the stability of IQ, ASD symptoms, and EBPs across approximately seven years, from early childhood to late childhood/adolescence in a community sample of children with ASD.

All children born between 01/09/2000 and 01/09/2004, with a diagnosis of ASD, living in two London boroughs (n=447) were invited into the study. Parents were asked to complete the Developmental Behaviour Checklist (DBC) and the Social Communication Questionnaire (SCQ) at two time-points: when the children were aged 4- to 9-years-old (time 1); and again when the children were aged 11- to 15-years-old (time 2). IQ was assessed for all participating children at time 1, and for a subset at time 2. Paired t-tests were used to examine differences between scores at times 1 and 2. Children with persisting EBPs were defined as those who met the DBC clinical cut-off at times 1 and 2. Logistic regression was used to test whether any individual or background factors were associated with persisting EBPs. Individual factors examined were: IQ, autism severity (as measured by the SCQ) and EBPs (as measured by DBC total) at time 1; age; and sex. Background factors included: parental education and employment.

Despite an overall reduction in total scores, almost two thirds (62%) of children who reached the DBC cut-off at time 1 remained above cut-off at time 2. Persisting EBPs were associated with higher SCQ scores at time 1 (p=.032), but not with IQ or DBC totals at time 1, age, gender, or parent education or employment (all p>.15).

Within this community sample of children with ASD, levels of ASD symptomatology and EBPs were less stable than IQ, and showed an overall reduction in parent-reported symptoms over time. However, for many of those with marked EBPs, these problems persisted over time. Higher autism severity at time 1 was associated with persisting EBPs. The study findings highlight the need for early identification of co-existing EBPs in children with ASD, in order to enable timely intervention. 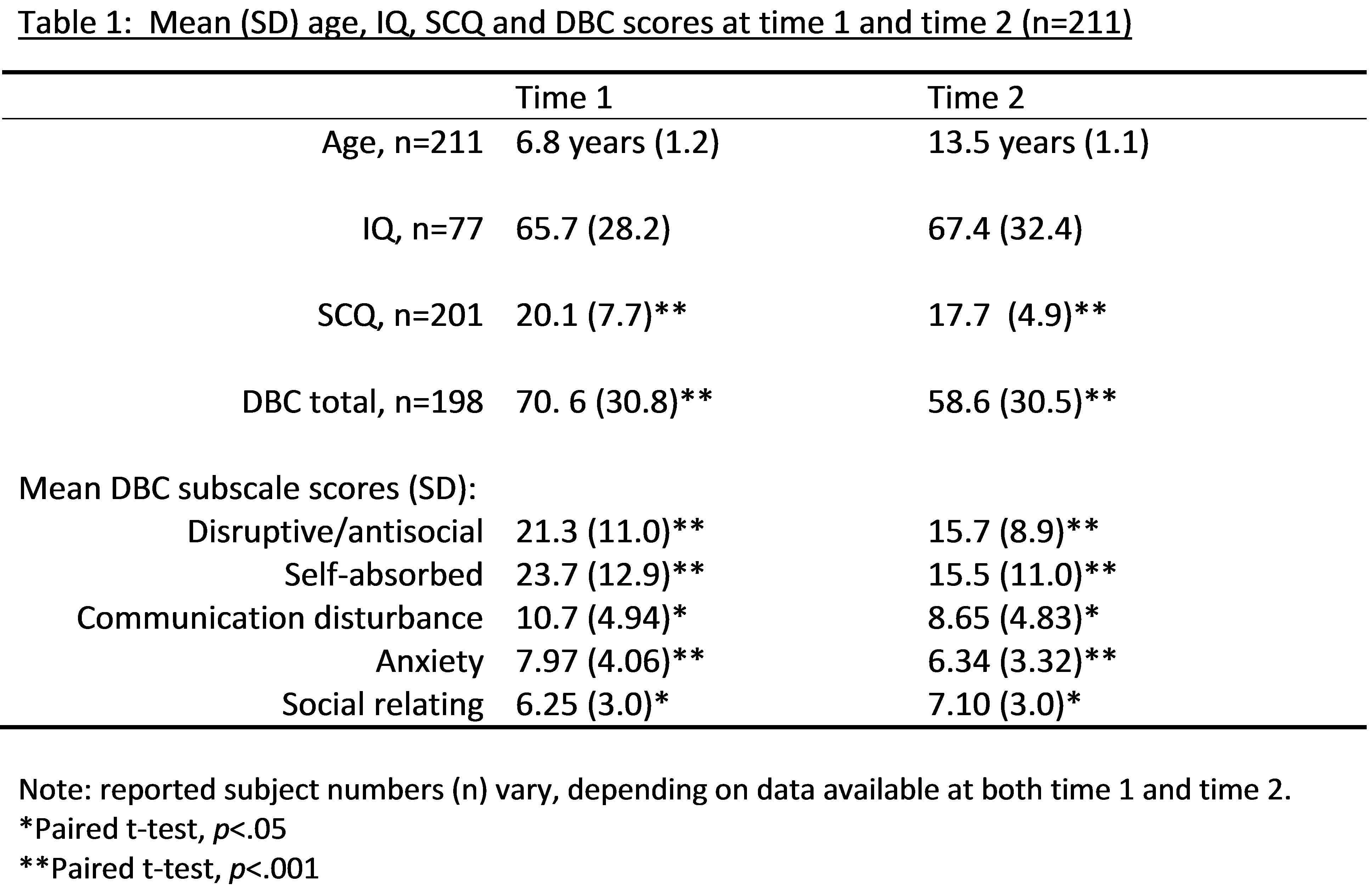