27803
The Association between Additional Emotional and Behavioural Problems in Children with ASD and Their Parents’ Stress and Mental Health Problems: A Systematic Review and Meta-Analysis.

Poster Presentation
Hall Grote Zaal (de Doelen ICC Rotterdam)
I. Yorke1, P. White1, A. Weston2, M. Rafla3, T. Charman4 and E. Simonoff1, (1)King’s College London, Institute of Psychiatry, Psychology and Neuroscience, London, United Kingdom, (2)University of Bath, Bath, United Kingdom, (3)King's College London, London, United Kingdom, (4)Institute of Psychiatry, Psychology and Neuroscience, King’s College London, London, United Kingdom
Background: Children with Autism Spectrum Disorder (ASD) and their parents are at heightened risk for mental health difficulties. According to research in the general population, parents’ and children’s psychological health are reciprocally related, with parent mental health problems (MHP) being well-established risk factors for psychopathology in their children. Investigating this relationship in families of children with ASD may have important implications for the development of therapeutic interventions. Existing findings are variable, which may be due to differences in sampling, measurement, and the variety of other child and parent factors that are included as covariates. Despite progressing research, most studies are based on data collected at single time-points from parents reporting on both themselves and their child.

Objectives: The current research aimed to systematically identify, organise and summarise the existing research on the relationship between additional emotional and behavioural problems (EBPs) in children with ASD, and parenting stress (PS) and MHP in their parents.

Methods: We conducted a systematic search to identify published studies analysing the relationship between additional EBPs in children with ASD and either PS or MHP in their parents. Zero-order correlation coefficients, quantifying the magnitude of the associations at single time-points, were entered into a series of meta-analyses. Multiple regression-based analyses involving other factors at both single and multiple time points were reviewed and summarised narratively.

Results: Seventy-one studies met criteria for inclusion in the review and 53 of these provided correlation coefficients. Twelve studies included an analysis of the relationships of interest across time. Meta-analyses showed significant pooled correlation coefficients of moderate magnitude for the associations of child total EBPs, externalising and internalising with both parent PS and MHP (pooled r=.25-.43; see Table 1, Figure 1). Low to moderate between-study heterogeneity was also found in each analysis, except the EBP-PS analysis which showed high heterogeneity (I2=70.84%). Sample characteristics, e.g. child age, did not significantly explain heterogeneity in any analysis. However, differences in PS measurement properties were found to account for 19.22% of between-study differences in the EBP-PS analysis (p=.03). In a separate planned analysis using data from studies which included an alternative informant for the child EBPs, the relationship between this and parent MHP was reduced but remained significant (pooled r=.21; p<.02). Narrative review of single time-point studies showed mixed evidence for unique associations between the child and parent factors of interest, depending on other factors accounted for. Longitudinal studies showed consistent evidence of earlier parent PS and MHP predicting later child EBP. Evidence for the reverse was less consistent, though more apparent in better-powered studies.

Conclusions: The literature to date shows robust association between additional EBPs in children with ASD and the PS and MHP of their parents. Although reduced when child EBPs are assessed by an alternative rater, the association remains significant, suggesting that the relationship cannot be entirely accounted for by shared rater effects. The association also maintains once certain other factors are accounted for. There is some evidence for bidirectional association between child and parent mental health over time. 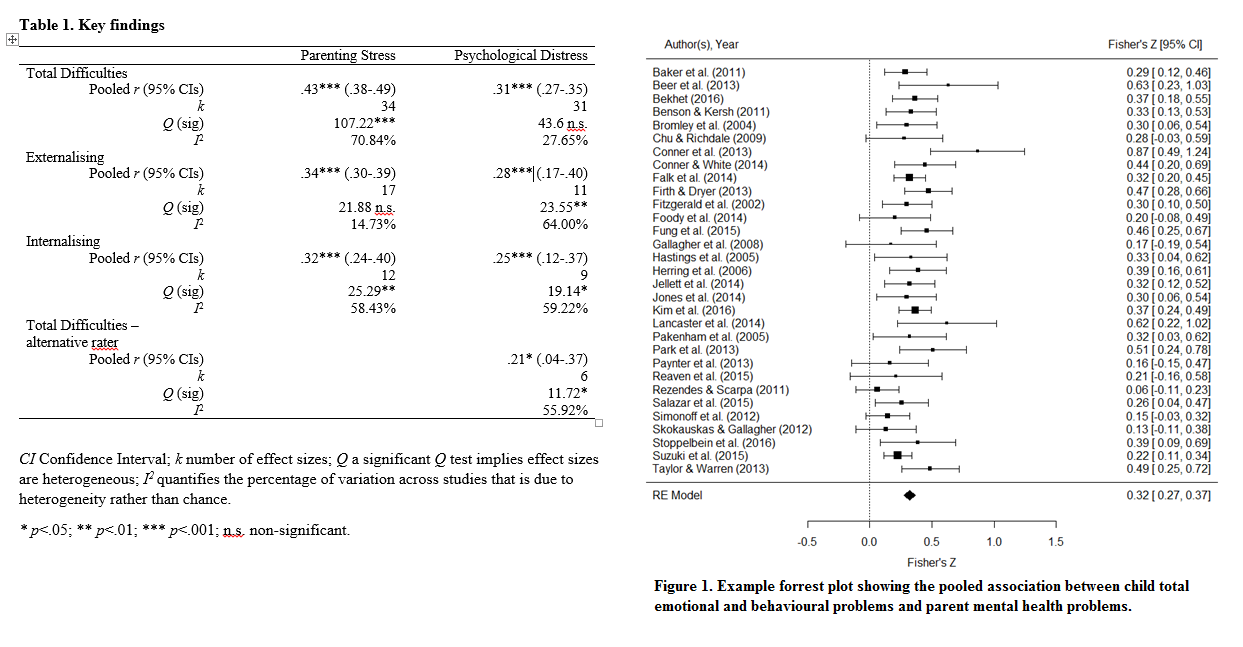