Sensorimotor abnormalities have been consistently reported in ASD individuals as an early impairment that may precede the development of defining characteristics. Motor abilities depend on multiple interacting pathways including cortico-cortical, cortical-subcortical, and cortico-cerebellar connections that reach spinal motor neurons through the brainstem.

Structural MRI studies of ASD individuals have demonstrated the potential role of the brainstem in the pathophysiology of ASD. However, the findings in volume alterations in subjects with ASD with respect to matched controls are controversial both in adults and children cohorts with some early studies that did not detect any significant differences between the ASD and control samples. For this reason, it is important to investigate the contribution to variability of brainstem volume measurements performed with different automated methods.

Objectives: The inter-method reliability of automated algorithms for brainstem segmentation was investigated, focusing on the potential involvement of this structure in ASD. Indeed, inconsistencies highlighted in previous studies on brainstem in ASD, may in part be a result of poor agreement in the extraction of structural features with different methods.

Methods: Structural MRI was used to measure the volume and the shape of the brainstem in young children with ASD and matched controls. A sample of 38 male children and 38 female children with ASD and their age and intellective-quotient matched controls were considered. Volume and shape analysis were carried out through some largely-used neuroimaging analysis tools for brain structure segmentation (FSL-FIRST, FreeSurfer -FS-, Advanced Normalization Tools -ANTs-), and for shape analysis (SPHARM-MAT). The inter-method agreement was quantified in terms of Pearson correlations between pairs of volumes obtained by different methods, whereas the degree of overlap between segmented masks was quantified in terms of the Dice index. In addition, a statistical examination of brainstem volume was performed using the analysis of variance (ANOVA) test. A comparison between ASD and control subjects was performed both in the male and female groups separately and in the entire dataset using gender as covariate and considering subjects with or without by intellectual disability separately.

Results: Both in terms of the Pearson correlation and of the Dice index, FSL-FIRST showed poor agreement with the other segmentation methods, which, by contrasts, consistently showed Pearson correlations greater than 0.93 and average Dice indexes greater than 0.76 in comparison among each other. The shape analysis confirmed the discrepancies among different segmentation methods, with particular reference to the FSL-FIRST under- and over-segmentation problems in specific brainstem regions. The BS volume resulted significantly higher in ASD when compared to controls both in the entire sample and in male subgroup for ANTs, FS 5.3, and FS 6.0 computations. No statistically significant volume differences were obtained for females in BS total volume.

Conclusions: This study suggests that research on brainstem alterations should cross-validate findings across multiple methods. Nevertheless, we reliably detected an enlargement of brainstem volume in the whole sample and in the male cohort, which is particularly driven by the subgroup of subjects with intellectual disability. 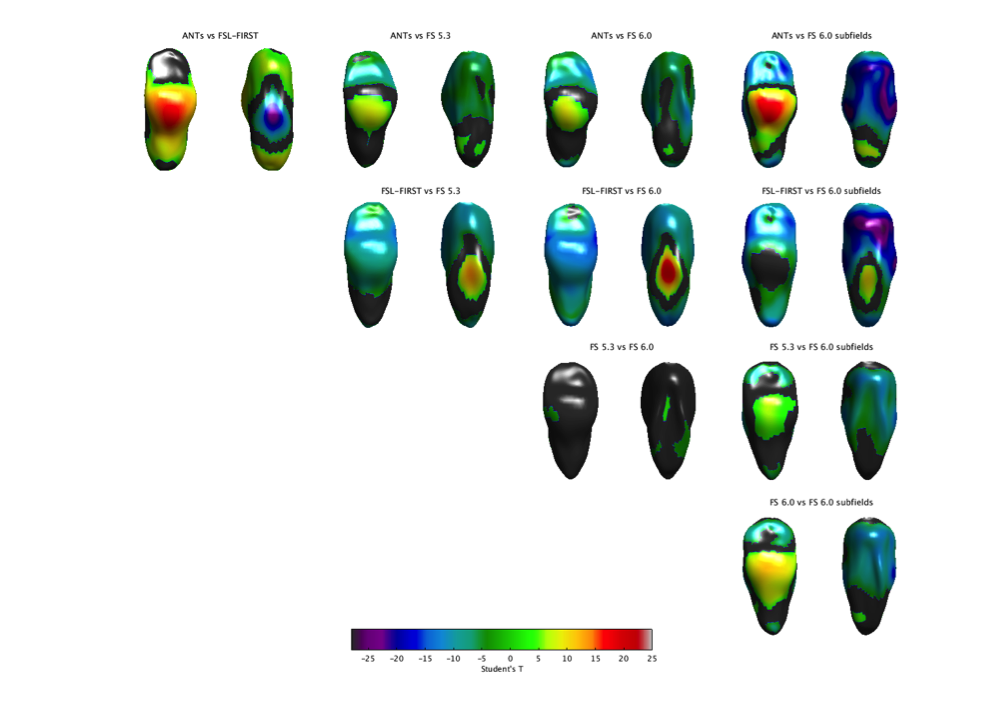