27880
Learning in a Probabilistic Environment in the EU-AIMS LEAP Cohort: How Do Individuals with Autism Spectrum Disorder Perform and How Does This Relate to Restricted, Repetitive Behaviour and Associated-ADHD Symptomatology?

Cognitive flexibility denotes the ability to shift thoughts and actions in response to changes in the environment. It requires learning from reinforcement and adapting to new situational demands. Impairments in cognitive flexibility have been proposed to underlie restricted, repetitive behaviour (RRB) in ASD, and to explain some behavioural deficits seen in often co-occurring ADHD. Yet, evidence for cognitive inflexibility in ASD and its relationship with symptomatology is mixed. Probabilistic reversal learning (PRL) tasks examine choice behaviour in an unstable environment, and perseverative errors (PEs) are frequently used to index cognitive inflexibility. Computational models add critical information beyond composite scores like PEs, to reveal how individuals learn over time, and the strategies they use.

Participants were 317 ASD individuals aged 6-30 years and 250 age-matched typically developing (TD) individuals recruited as part of EU-AIMS LEAP (Charman et al., 2017). They were split into: children (6-11), adolescents (12-17) and adults (18-30). Participants learned to choose the ‘most often’ rewarded stimulus, from a choice of two, with an 80:20 reward/punishment ratio. Feedback contingencies were reversed at the task midpoint. Win-stay lose-shift scores were calculated in both phases (acquisition/reversal); PEs were derived from the reversal phase (den Ouden et al., 2013). Hierarchical Bayesian analysis was then used to fit 3 computational models using the R-based package, hBayesDM: Reward-Punishment, Experience-Weighted Attraction (EWA) and Fictitious-Update. IQ scores were covaried in each model after z-transform. RRBs were assessed using the Repetitive Behaviour Scale-Revised. ADHD symptomatology was measured using the DSM-5 ADHD rating scales.

There was an overall group effect, whereby ASD individuals made significantly more PEs than controls and showed less win-stay and more lose-shift behaviours (all p<.001, d=0.23-0.33), however post-hoc analyses revealed this was only significant in adolescents (all p<.005, d=0.38-0.54). Model comparisons revealed the best estimate for children in both groups and ASD adolescents was the Fictitious-Update model; for TD adolescents the Reward-Punishment model outperformed the others; while for adults in both groups the EWA model was superior. Learning rates of each age group’s winning model significantly correlated with PEs (all rs=.34-.68, all p<.001). The only significant relationship between PRL task measures and symptomatology to survive multiple comparisons was that of lose-shift behaviours and both hyperactivity/impulsivity and inattention in ASD adults (Figure 1; both rs=0.32, pcorrected<.003).

Impairments in cognitive flexibility were only found in ASD adolescents. Combined with the model comparisons, findings suggest that different strategies are employed by different age groups when learning in a probabilistic environment, and that these strategies transition during adolescence, with potentially different developmental trajectories for ASD and TD individuals. The relationship between task performance and ADHD symptoms in ASD adults has important implications – a better understanding of how learning cognitive flexibility develops in ASD and its relationship with symptomatology will inform effective interventions. 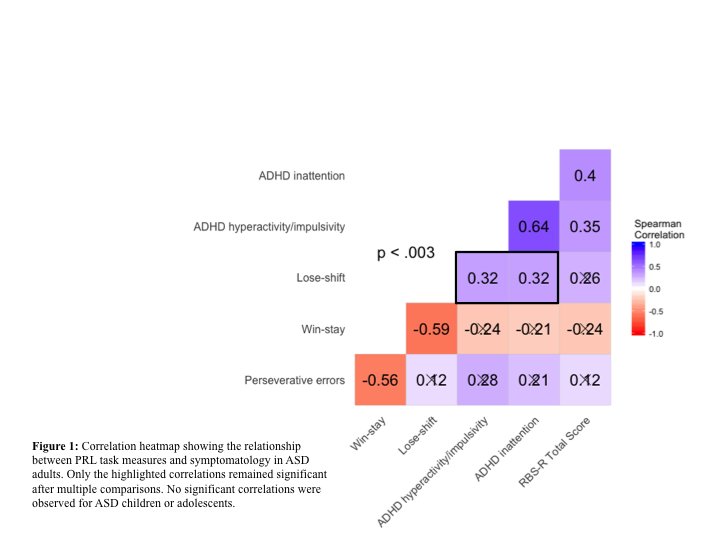