Poster Presentation
Hall Grote Zaal (de Doelen ICC Rotterdam)
M. Segers1, J. M. Bebko1, B. L. Ncube2 and R. A. Stevenson3, (1)York University, Toronto, ON, Canada, (2)Psychology, York University, Toronto, ON, Canada, (3)Western University, London, ON, Canada
Background: Individuals with ASD have been shown to have a decreased sensitivity to the timing of multisensory inputs that are linguistic in nature, but not to simple, non-social stimuli. These difficulties have been theoretically and empirically linked to speech perception and communication difficulties. It is unclear if difficulties with socio-linguistic processing are a social or a linguistic issue. Pupillary responses (dilation and constriction) are reliable indices of cognitive operations including preference, mental load, and incongruity.

Objectives: The current study is the first to measure pupillary responses to dynamic, temporally manipulated audio-visual stimuli to infer cognitive processes involved in perception of non-social, social, and social-linguistic stimuli. The aims of the current study were threefold:

1) Determine if differences between pupillary responses to non-social and social-linguistic information are the result of difficulties in social or linguistic processing.

2) Determine if processing of asynchronously presented stimuli can be indexed through pupillary change, and if responses differ between typical development (TD) and ASD.

3) Determine if pupillary responses to stimuli relate to clinical symptomatology in ASD.

Methods: Participants included 39 children with ASD (Age; M=12.3, SD=3.2) and 32 TD children (Age; M=12.4, SD=3.0) who were matched for chronological and mental age using the WASI-II (Wechsler, 2011). Each participant was presented with audiovisual stimuli in 6 conditions in a 2x3 design. Stimuli were one of three types, non-social (a video of the children’s game Mousetrap), social non-linguistic (a video of an actress making verbal, non-speech sounds), and social-linguistic (the same actress speaking). Each of these stimulus types were presented synchronously or asynchronously (1000ms delay, collapsed across visual-leading and auditory-leading). Pupillary responses were captured and recorded using a Tobii X60 eye-tracker. Participants’ parents completed the Autism Quotient- Child Version as a measure of symptom severity. 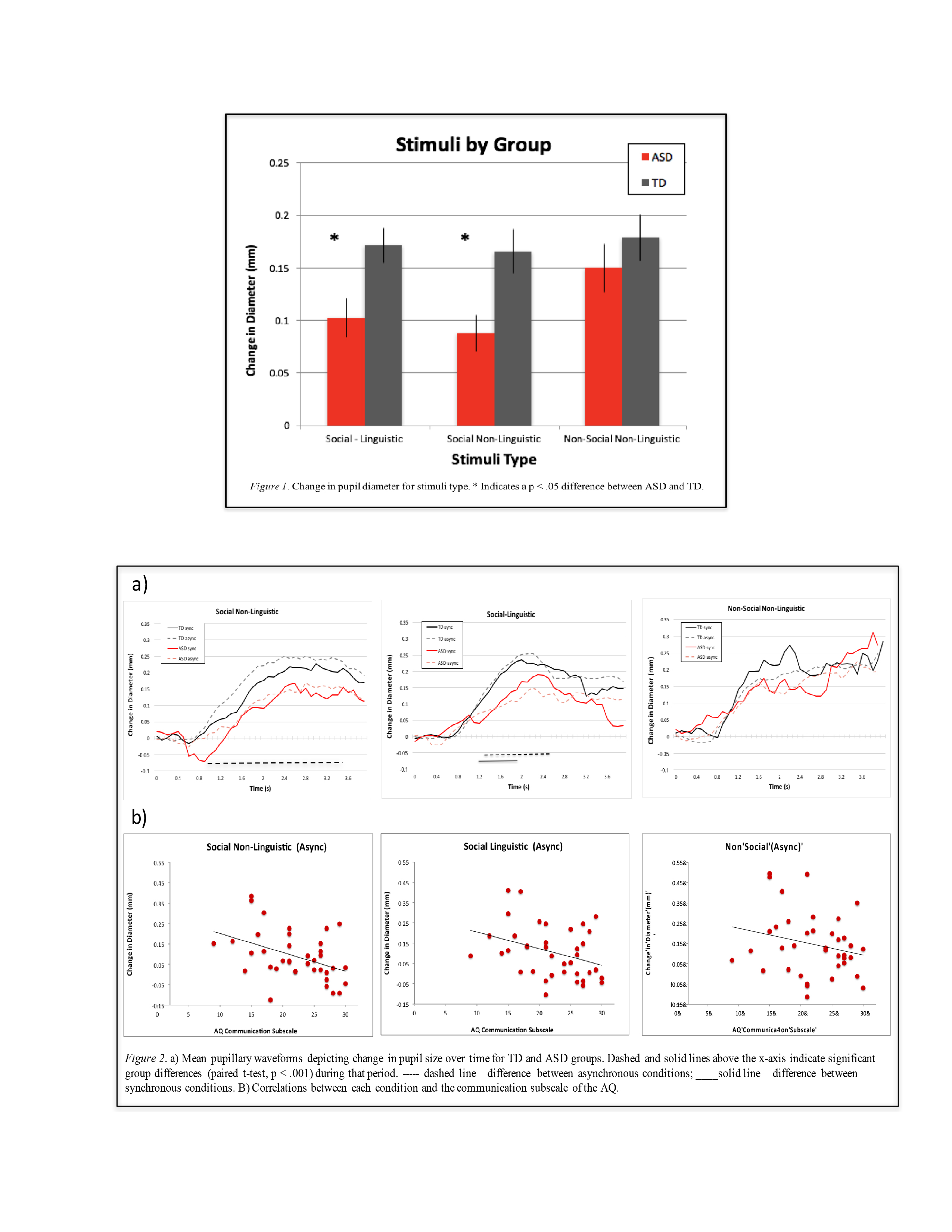