Restricted interests and repetitive behaviours (RRBs) are a core diagnostic symptom of Autism Spectrum Disorder (ASD) and tremendously impact an individual’s day-to-day life, yet the underlying factors of RRBs are not fully understood. Recent work suggests that sensory issues related to ASD, specifically sensory sensitivities, contribute to RRBs. While these studies have provided evidence for a relationship between RRBs and hypersensitivity in individuals with ASD, these studies have mostly utilized parent report measures which conflate sensory reactivity with sensory sensitivity.

Participants consisted of 110 university students who completed questionnaires reporting on sensory processing (Sensory Profile-2; SP-2), and RRBs (Repetitive Behaviours Questionnaire-2; RBQ-2). Behavioural measures of visual sensitivity involved a detection task from which sensory thresholds were determined. Participants were instructed to indicate when a Gabour patch was present in background noise. The Gabour patch was presented at 8 different contrasts ranging from 0.025 to 0.5 which were randomly presented ten times each. There were also 80 null trails for a total of 160 trials. A two-step analysis was employed. First, correlational analyses were conducted to identify relationships between sensitivities and RRBs using the various measurement methods. Second, hierarchical regressions were conducted to examine the unique contributions of sensory sensitivities while controlling for demographic variables.

Correlations confirmed a negative relationship between RRBs and visual thresholds (r2=-0.275, p=0.008). There was also a strong positive relationship between RRBs and the Sensory Sensitivity Quadrant of the SP2 (r=0.340, p=0.001). Importantly, there was no relationship found between the two measures of sensory sensitivity (r=-0.049, p=0.645). In fact, a hierarchical regression revealed that both the behavioural measure of sensory sensitivities as well as the SP-2 “sensory sensitivity” measure significantly predicted RRBs (r=0.435, p<0.001), but each of them explained different portions of the variance in the RBQ (pr=-0.275, p=0.009; and pr=0.351, p=0.001, respectively).

The relationship between the questionnaire data from the SP-2 and the RBQ confirm previous results that RRBs increase with increased sensitivity. There was also evidence for a relationship between empirically-measured visual thresholds and the RBQ. Lower visual thresholds imply higher levels of sensory sensitivity, suggesting, again, that as sensitivity increases, RRBs increase as well. However, surprisingly, there was no relationship between the two so-called measures of sensory sensitivity. Results from the hierarchical regression suggest that these two metrics measure distinct constructs and account for different aspects of RRBs. We hypothesize that the behavioural tasks measure sensory sensitivity, questionnaire data actually measure sensory reactivity, as parent reports are intrinsically dependant on parents observing the behavioural response that a child has to a sensory stimulus. These data also highlight the need to distinguish between sensory sensitivity and reactivity in the literature. 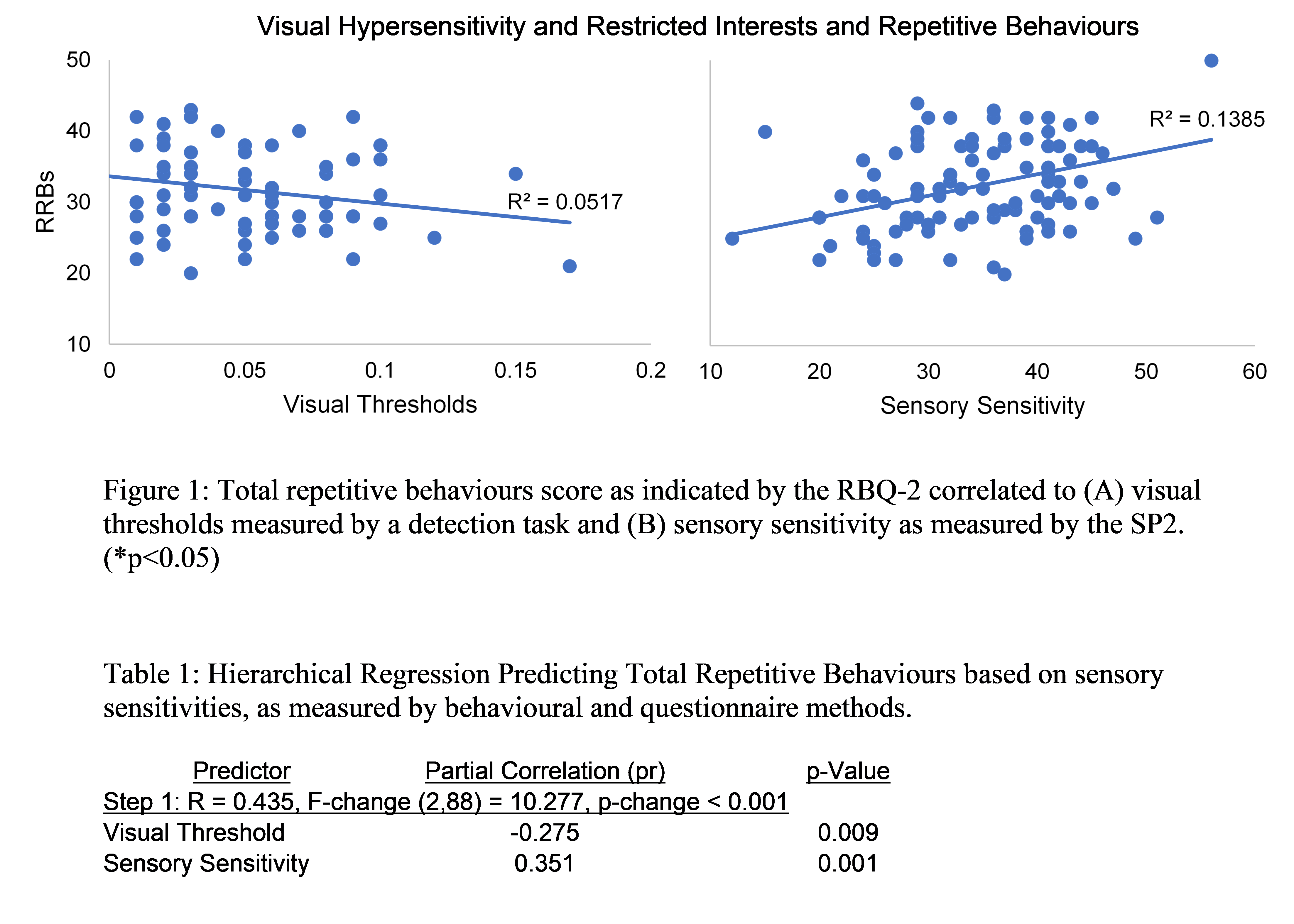