Objectives: To investigate whether symptoms of RRBI (i.e., stereotyped, self-injurious, ritualistic, compulsive, insistence on sameness, and restricted behavior), as measured by item-level data on the Repetitive Behavior Scale-Revised (RBS-R), can classify males versus females with ASD.

Methods: Participants included 615 youth with ASD (507 males; 82.4%), between 3 and 18 years of age (M=10.26, SD=4.20), who agreed to share data with the National Database for Autism Research (NDAR). A stepwise discriminant function analysis (DFA) was used to predict the degree RBS-R data could correctly classify gender in a large sample of individuals with ASD. Standardized canonical function coefficients (SCFC) from the DFA represent the contribution of each variable to the discrimination between groups, with greater SCFC indicating greater discrimination.

Results: DFA results suggest that RBS-R items significantly differentiate girls versus boys with ASD, Wilks’ λ=0.89, χ2=70.79, p<0.001. Of note, gender was classified based on a set of 8 items (see table 1). Interestingly, the items that differentiated boys from girls did not solely consist of higher stereotyped and restricted behavior in boys (as indicated by negative SCFC scores). Half of the items that differentiated gender were higher in females with ASD (as indicated by positive SCFC scores) and from the self-injurious, compulsive, and insistence on sameness domains. This set of RBS-R items had greater success in correctly classifying boys with ASD (67.90%) than in correctly classifying affected girls (61.00%).

Conclusions: This study extends findings of gender differences in RRBI for ASD, demonstrating that girls with ASD may demonstrate higher self-injurious, compulsive, and insistence on sameness behavior than affected boys. It is important for future research to disentangle whether these elevated rates of RRBI in girls with ASD are central to the female autism phenotype or an epiphenomenon of the high rates of co-occurring disorders (e.g., anxiety) noted in affected girls. 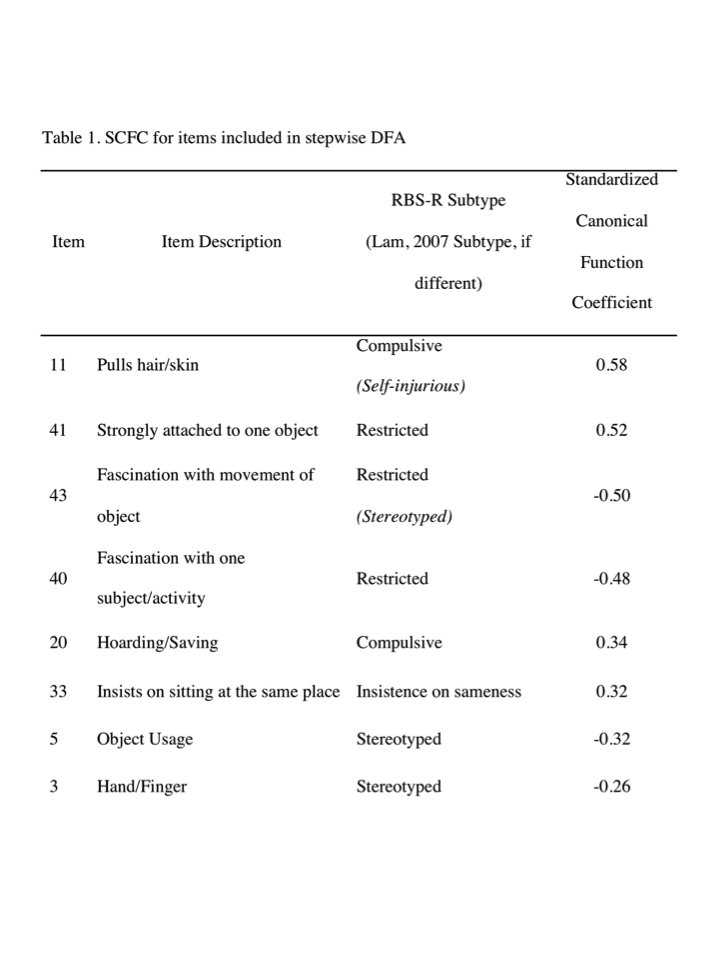