Objectives: We examined: 1) whether fixation time on faces differentiates toddlers who are showing behavioral signs for ASD (HR-ASD) and age-matched typically developing controls (TD), and 2) whether this marker of social attention relates to social communication and cognitive skills.

Methods: Two age-matched groups of HR-ASD (n=64;Mage-months=18.5,SDage=2.5) and TD (n=21;Mage-months=17.4,SDage=2.3) toddlers participated in a visual paired comparison eye-tracking task (Tobii Systems, Inc.). Toddlers in the HR-ASD group fell within the mild-to-moderate or moderate-to-severe ranges of concern on the Autism Diagnostic Observation Schedule, Toddler Module (ADOS–T). Toddlers viewed two fixed images of faces that were presented in juxtaposition to one another four times each with an on-screen duration time of ten seconds per trial, while eye fixation data was recorded. One image consisted of the child’s primary caregiver and the other of a stranger who was matched based on similarity of physical appearance. Areas of interest (AOI; mouth, eyes, face) were drawn for each image, and eye fixation time in milliseconds per AOI was obtained. An independent sample t-test was used to examine risk group differences in percent time looking at the face (i.e., time fixation on face/total fixation time). Correlations between percent eye fixation to the face and non-verbal/verbal developmental quotient (NVDQ/VDQ) were also examined (Mullen Scales of Early Learning).

Conclusions: Our results indicate that toddlers showing early signs of ASD spent less time looking at faces than TD toddlers. Moreover, HR-ASD toddlers who spent more time looking at faces had higher cognitive abilities, yet no relationships were found with ASD symptoms. Figure 1 depicts a great deal of heterogeneity within the HR-ASD group, suggesting that this may be a promising marker of which toddlers may benefit most from intervention. Null findings with regards to the familiar/unfamiliar face and mouth/eyes suggests these contrasts are developmentally inappropriate within this age group. Ongoing research will examine attention to faces as an outcome measure and predictor of response to intervention in an eight-week clinical intervention designed to target early social communication skills. 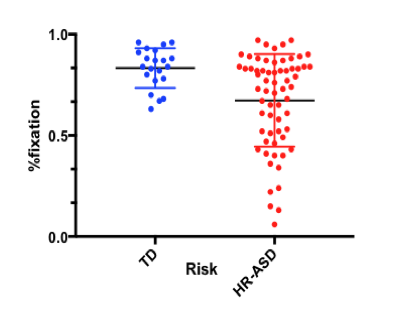