Children with Autism Spectrum Disorder (ASD) are disproportionately hospitalized for psychiatric treatment. Converging evidence suggests that sleep disturbances are associated with compromised emotional and behavioral health in children with ASD; however, the role of sleep in psychiatric inpatient treatment is largely unknown. Moreover, published studies examining sleep in relation to externalizing symptoms in children with ASD have relied on parent-report questionnaires of sleep which may be biased by the extent to which parent sleep is disturbed. Finally, inpatient psychiatric hospital settings, characterized by stimulus control, highly structured daily routines and low-distraction sleep environments, provide a unique opportunity to examine sleep in relation to clinical outcomes in the context of good sleep hygiene.

The goal of the current study was to examine observed sleep during psychiatric hospitalization as a predictor of parent-reported improvement in irritability, hyperactivity, and emotion regulation in children with ASD at discharge.

Total Sleep Time (TST), number of arousals from sleep (NUMA), and minutes of wakefulness after sleep onset (WASO) were observed in 158 children with ASD (confirmed by research-reliable ADOS-2) between the ages of 4 and 20 (mean = 12.7 ± 3.3) across six inpatient units, drawn from the Autism Inpatient Collection (AIC). Nightly TST, NUMA, and WASO were measured observationally by hospital staff in 15 minute increments. Multiple regression models tested average TST, NUMA, and WASO as predictors of parent-reported irritability, hyperactivity, and emotion dysregulation at discharge, controlling for parent-reports at admission. All analyses were further adjusted for study site, length of hospital stay, and use of medications for sleep, antidepressants/anxiolytics, antipsychotics, and stimulants. Exploratory analyses examined if relationships between sleep and clinical improvement varied by psychiatric co-morbidity.

Results of the current study suggest that sleep may be an under-examined predictor of clinical improvement in children with ASD hospitalized for psychiatric treatment. Given that the inpatient environment is consistent with many sleep hygiene recommendations, underlying mechanisms, such as autonomic dysregulation, may account for the relationship between nocturnal arousals, hyperactivity, emotion dysregulation, and anxiety. Future studies using objective measures of sleep (e.g., actigraphy) are needed to further examine the interrelationships of sleep and externalizing symptoms. 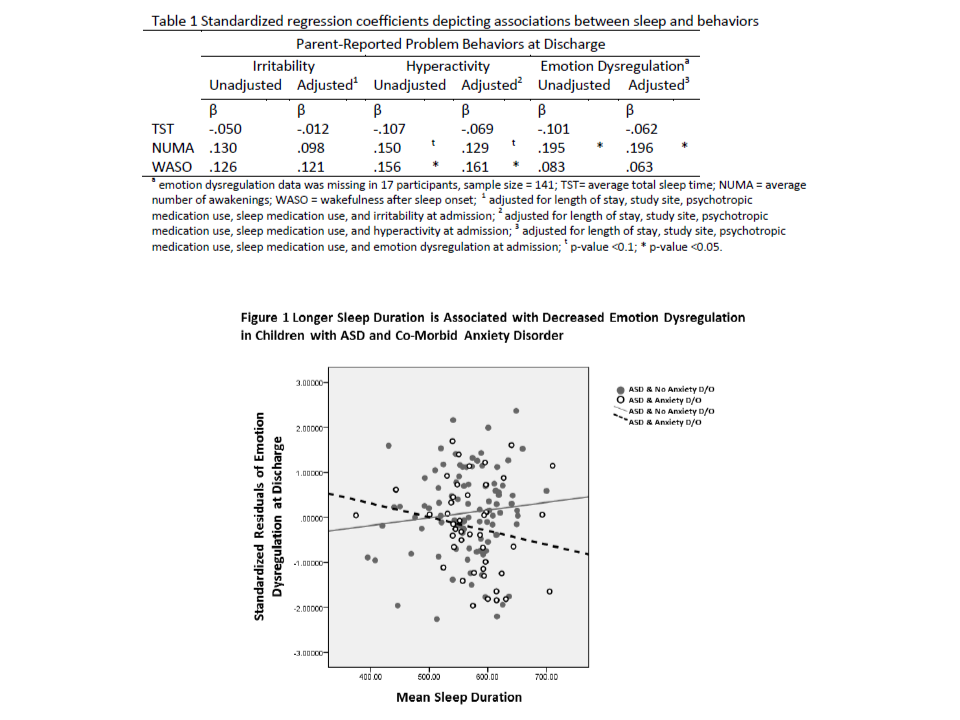