Methods: Autistic students attending high school (n=17) or college (n=22) in a metropolis completed structured interviews and assessments. High school students were recruited from a technology-based summer camp. Undergraduates were recruited from a mentorship program at a public university. All participants were asked to define autism and describe how autism can make someone stronger. High school students were also asked to “describe yourself to someone who doesn’t know you”. Similarly, undergraduates were asked to describe themselves using only six words/concepts; they also completed the Reading the Mind in the Eyes task (assessing ToM; Baron-Cohen et al., 2001). Autistic researchers involved in a broader participatory initiative encouraged us to focus on disability identity (stating that it is the most interesting research focus) and helped develop coding schemes and code.

Conclusions: As hypothesized, autistic high school and undergraduate students recruited in person were less likely to endorse acceptance of neurological differences than online samples (e.g., Gillespie-Lynch et al., 2017). While 36% of participants in prior online research described autism as a neutral difference, less than 10% of the autistic youth recruited in person in this study described autism as a neutral difference. In fact, over 50% of the autistic high school students could not describe autism at all. Students who highlighted strengths associated with autism described themselves agentically, suggesting that neurodiversity-aligned viewpoints are empowering. Findings align with conjectures by an autistic researcher that autism understanding increases with development (Jones et al., 2013) and suggest that autism research should be conducted in person and online simultaneously to maximize generalizability of findings. 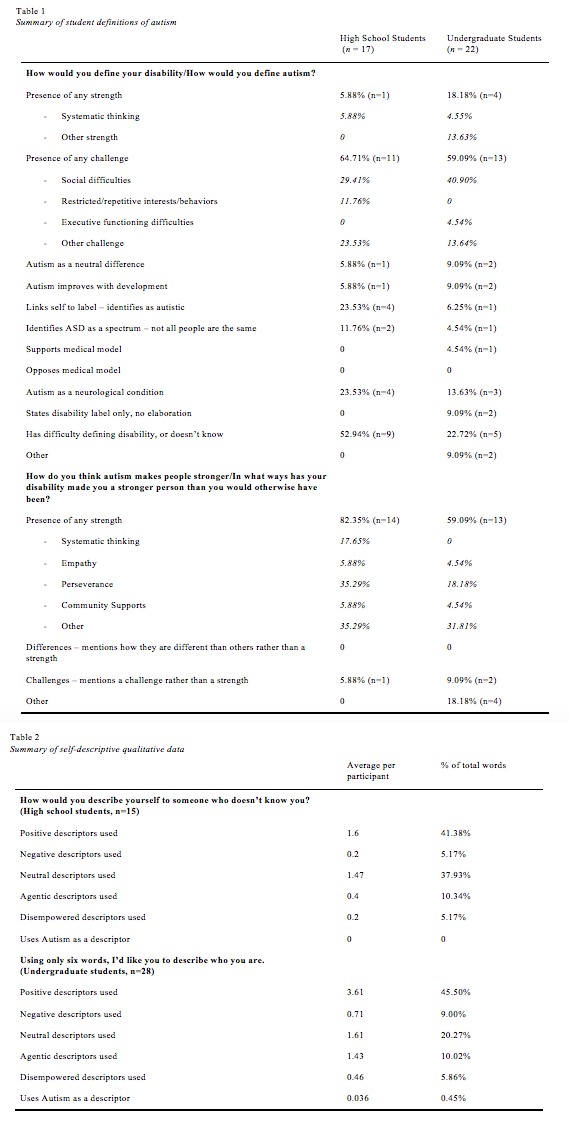