Methods: Participants were 161 children with ASD, age 33-54 months at baseline, with limited language (<30 initiated spoken words during behavior observations). They were randomized to DTT (n=82) or IDA (n=79), and received one-hour intervention sessions five days per week for six months. Outcomes were assessed at baseline, end-of-treatment, and six-month follow-up. Outcome measures included the Reynell Developmental Language Scales and the Mullen Scales of Early Learning (MSEL), both assessing expressive and receptive language, and the Early Social Communication Scales (ESCS), an observational measure of nonverbal communication behaviors, including frequency of initiations of joint attention (IJA). Generalized linear mixed models (GLMM) were fitted with log link function for count outcomes and identity link function for Gaussian outcomes. Hurdle models were used for Reynell expressive language and IJA; this model examined whether or not each participant displayed the behavior (binary process) and, if so, how many (zero-truncated Poisson process).

Children in both DTT and IDA significantly improved from baseline to post-intervention and follow-up.

Conclusions: Participants in both DTT and IDA improved, and the groups did not significantly differ on most outcome measures. IDA did produce larger gains in IJA for participants who already demonstrated some joint attention skills when they began intervention. The similar improvements observed in approaches that differ markedly in intervention content and method suggest that it may be advantageous to pinpoint efficacious components of each approach and identify ways to match components to the needs of individual children with ASD. 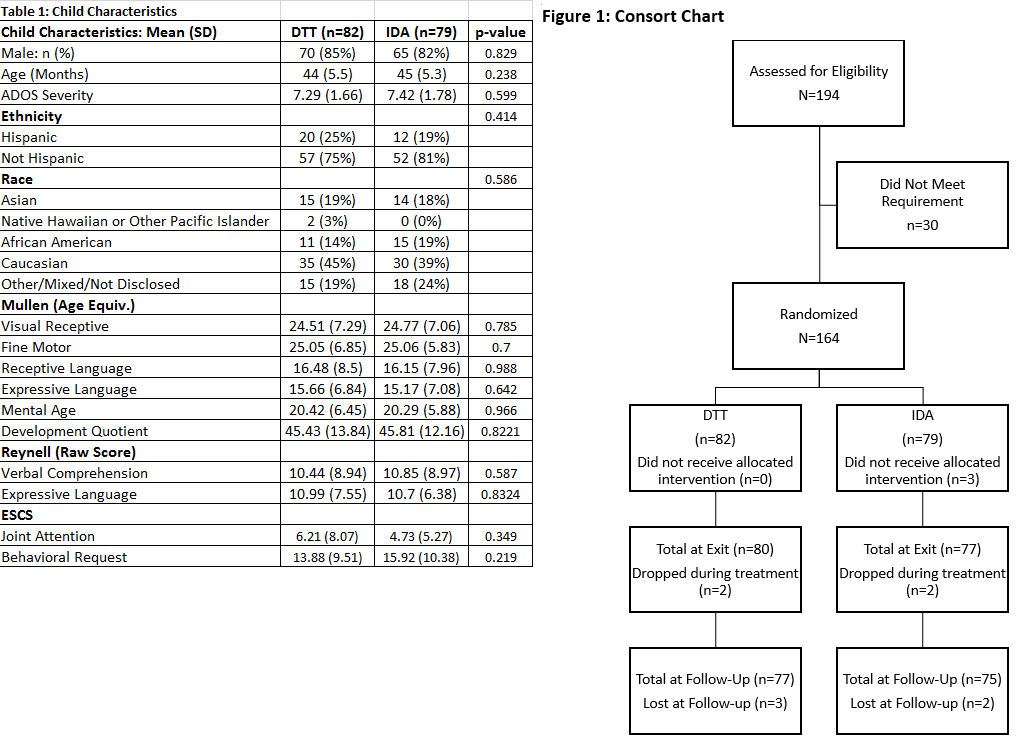