Poster Presentation
Hall Grote Zaal (de Doelen ICC Rotterdam)
A. M. Kellerman1, A. J. Schwichtenberg1, R. Abu-Zhaya1, M. Miller2, G. S. Young3 and S. Ozonoff3, (1)Purdue University, West Lafayette, IN, (2)University of California, Davis, MIND Institute, Sacramento, CA, (3)Psychiatry and Behavioral Sciences, University of California at Davis, MIND Institute, Sacramento, CA
Background: The Social Responsiveness Scale (SRS) is a commonly used questionnaire to measure elements of the broader autism phenotype (BAP), or what is sometimes referred to as quantitative autistic traits (QAT). Previous studies document the presence of sub-clinical autism traits in families raising children with autism spectrum disorder (ASD) but the functional and treatment-related implications of these traits are poorly understood and understudied. Family members with elevated QAT may require more support when implementing parent-mediated interventions. To identify parents who may need more support, the use of the SRS has been recommended. However, it is unclear if SRS scores are associated with maternal behaviors within a social context.

Objectives: To assess the associations between maternal SRS-2 scores and maternal responsiveness in context (for this study within a play session).

Methods: Dyads were recruited from families with at least one older child with ASD (high-risk group, n = 90) or families with no history of ASD (low-risk group, n = 62). Play interactions included mothers and a younger infant sibling. Children with ASD where not included to minimize the impact of their social difficulties on maternal ratings of responsiveness. Dyadic interactions were micro-coded for gaze, positive affect, and vocalizations when infants were 6, 9, and 12 months of age. Using these micro-codes, theory-driven composites were created to index observed maternal responsiveness (i.e., initiations, responses, responsiveness timing). Maternal social responsiveness ratings were reported by a spouse/partner on the SRS.

Conclusions: SRS scores were not associated with maternal behaviors within a social context. This study had the power to detect moderate-to-large effect sizes. Although, the lack of association may reflect several factors. First, the SRS was designed to capture more than just social difficulties and includes other elements of the BAP (e.g., rigidity). Second, marked social difficulties may only be apparent with higher scores (severe range) of the SRS, which were not represented in this sample. In sum, the present study does not support the use of the SRS to identify parents who may need additional support during parent-mediated interventions but further research is warranted with parents’ scores falling within the severe range. 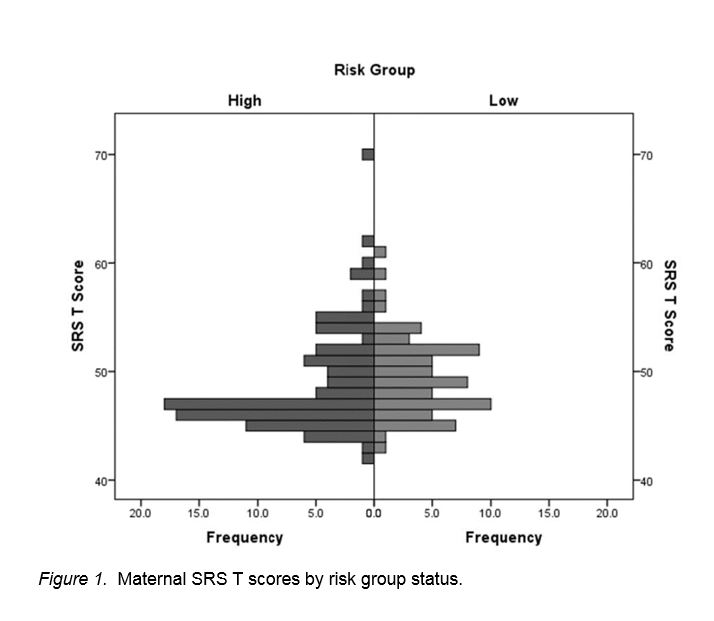