Objectives: Use ego-centric social network techniques to test the association between the perception of transition success and different types of social relationships, including instrumental relationships such as problem-solving networks and affective relationships such as trust networks. We test the hypothesis that problem solving networks and trust networks among home/school/community care providers are associated with perceptions of transition success.

Methods: 47 participants completed social network interviews, conducted 6 weeks before the end of the child’s school year at the old school, including 8 parents and 39 providers. We interviewed key participants using the SoDI: The Social Dynamics of Intervention Measure (McGhee Hassrick et al 2018; McGhee Hassrick and Carley 2015), where each participant reported frequency of problem solving and degree of trust for each person on the team roster. Using ORA network analysis software (Carley et al 2004), we computed egocentric problem solving and trust measures for each participant, including in-degree (# of team members who seek out the participant), out-degree (# of team members that the participant seeks out) and eigenvector centrality (degree of connectivity that the participant had with well-connected team members). Participants also rated perceived transition success on a 5-point Likert scale, where 1 = not successful and 5 =very successful. We used OLS regression to test associations between our outcome measure of perceived transition success and our egocentric network predictor variables. 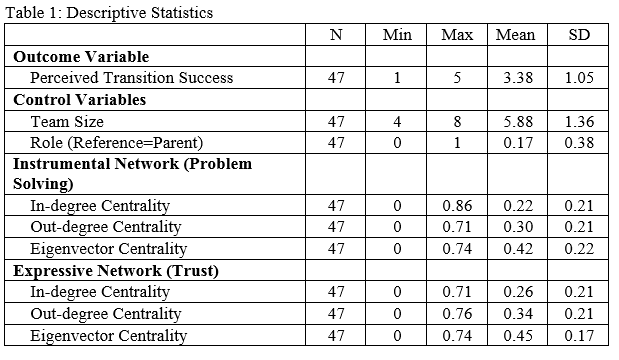