Objectives: The present study examined 1) whether atypical processing of complex visual information at the behavioral level is a defining feature of ASD children at individual level as well as group level and 2) whether this processing has a strong relationship with processing speed, one of the general cognitive skills.

Methods: Participants were 28 Korean children - 14 ASD (13 boys; mean age = 8.41 year; SD= 1.70) and 14 TD children (12 boys; 8.14 year; SD = 1.46) matched by chronological age and overall IQ (ASD mean IQ = 90.14; SD= 14.33; TD mean = 97.07; SD = 10.99). Children’s overall IQ was assessed using K-WISC-IV and its sub-component, processing speed, was used to examine the relationship between processing speed and costs of the complexity. Children’s processing of simple and complex visual information was assessed using a shorter version - 24 trials in total - of Bertone et al.’s (2005) grating task. In this task, either a set of simple and complex static gratings was presented on a computer monitor either horizontally or vertically. Children were asked to report the orientation of each grating set by pressing one of the right or top arrow keys and their accuracy and reaction times were recorded by a computer. Additionally, unlike previous studies, we directly quantified costs of the complexity by computing differences in reaction times and accuracy between simple and complex conditions.

Results: Mean accuracy and reaction times did not differ across ASD and TD children in either simple or complex condition (ps > 0. 23). However, costs of the complexity in reaction times, not in accuracy, were greater in the ASD group than in the TD group (F(1,31) = 9.699, p= .004). This high cost was also observed at the individual level - 11 of 14 ASD children showed complex cost scores above the mean of the TD group, resulting in a good level of differentiation between ASD and TD (ROC-AUC: 0.801, 95% CI = 0.628-0.974). Spearman correlation analyses showed that within the ASD group none of the overall IQ and processing speed scores have a strong association with complexity cost scores (ps > .105).

Conclusions: Our findings support the complexity-specific hypothesis in ASD children. High costs in processing complex visual information in ASD children are not simply explained by slow processing speed and could serve as a defining feature of ASD at both group and individual levels. 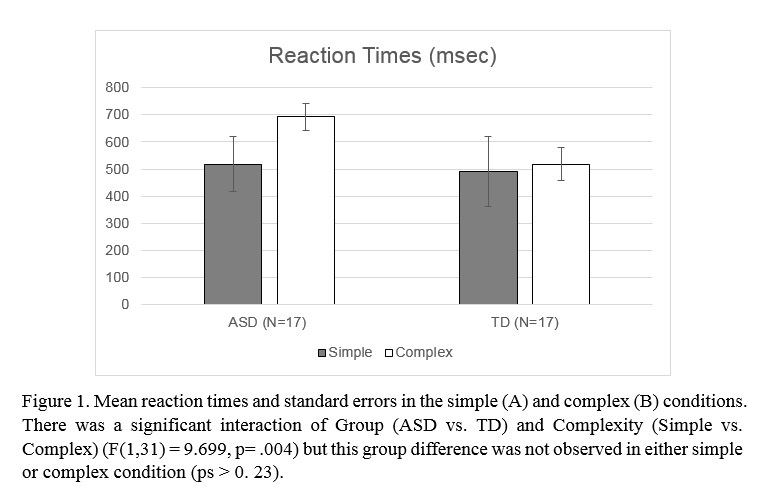