Objectives: This study aims to describe adult outcomes in a sample of individuals with ASD across 1) demographic areas and daily activities, 2) social participation and relationships, 3) comorbidity and behavior problems, and 4) general health outcomes.

Methods: Participants were young adults who have been seen as part of an ongoing 25-year long longitudinal outcome study. Participants were first referred to the study at age two following concern about possible ASD, and have been followed in the community over their lifetime. The current analyses include 141 young adults (66% of the original sample) who have contributed data through mail-based questionnaires and/or in-person visits after the age of 18. Data was gathered through a battery of diagnostic and clinical measures, interviews, and questionnaires. Of the 141 young adults in this sample, 84% (n=119) have received a lifetime diagnosis of ASD, and 16% (n=22) are considered to be non-spectrum (NS). In the ASD sample, 50% have a Verbal IQ of 70 or greater (68% in the NS group).

Results: The ASD sample falls within the reported limits of other studies in the area of daily activities. 63% of individuals live at home with their parents and only 18% received post-secondary degrees. 39% of the ASD sample was reported to be unemployed, compared to only 14% of the NS sample. However, looking at general health outcomes and psychiatric comorbidity, the current sample was more minimally impacted than other adult samples. 21 out of 74 (28%) individuals with ASD seen at age 25 endorsed a psychiatric comorbidity; rates that are much lower than other reports, though significantly higher than the general population mean for adults (17.9%; SAMHSA, 2015). Very few needed emergent psychiatric care (4%) or hospitalizations (1%), and the mean number of psychiatric medications taken is only 1.7 per individual. Results of social functioning will also be reported and discussed.

Conclusions: Preliminary findings suggest that adult ASD populations seen in the community are impaired with regard to daily activities, though may be less impacted by psychiatric comorbidity and general health problems than clinically-active samples. 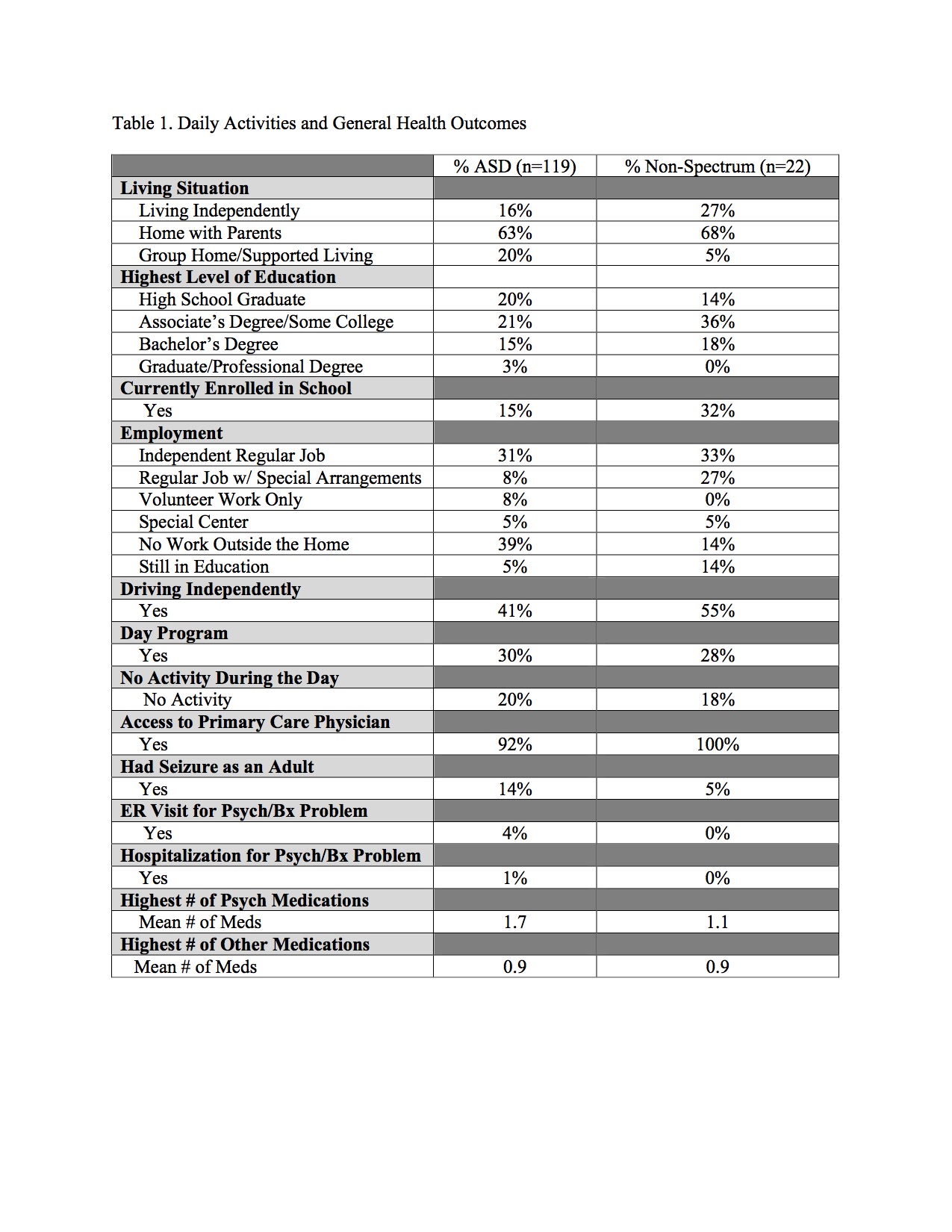