Objectives: To generate a first estimate of the prevalence of ASD among school age children in Qatar, using a whole population-based approach; and to evaluate correlates of ASD in a large representative sample of cases.

Methods: We surveyed the population of children age 5 to 12 (N=176,960) residing in Qatar in 2015. Children of Qatari and resident families were included. Case ascertainment relied on two complementary approaches. First, eligible children attending medical/special needs centers and schools providing diagnostic and treatment services for children with ASD were screened. Records of eligible children were abstracted and supplemented by parental interviews. Second, we performed a two-stage survey for regular primary school children. Following a screening with the locally validated version of the Social Communication Questionnaire (SCQ), random samples of screen positive and negative children were further evaluated to determine ASD case status. Prevalence among children age 6 to 11 was estimated after taking into account different sampling fractions and participation rates at each survey phase. Medical, developmental, educational and behavioral data were collected on all ASD cases and analyzed to describe trajectories of ASD children.

Conclusions: This study provides the first estimate of ASD prevalence in Qatar which is consistent with recent international studies. The instruments and methods employed should help in designing comparable surveys in the region. We estimated that 50,500 children under age 5 and 187,000 youths under age 20 have ASD in the Gulf countries. This estimate should guide planification of health and educational services in the Gulf countries for a population that is young and growing fast. 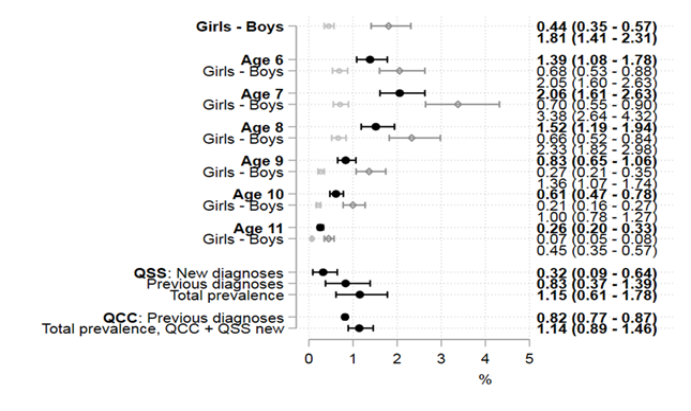