“Joint action”—the ability to coordinate actions with others—is critical for achieving individual and interpersonal goals (Sebanz, 2006), and for our collective success as a species (Tomasello, 2009). Joint actions require accurate and rapid inferences about others’ thoughts, intentions, and feelings (Pesquita, Whitwell, & Enns, 2017); skills that are thought to be impaired in ASD (Baron-Cohen, 2005). To date, research has not investigated joint action abilities in ASD during real-world social interactions.

1) To determine if there are joint action differences in children with ASD relative to typically developing (TD) children.

3) To determine how joint action differences in ASD are manifested with respect to correlates with behavioral and clinical measures.

The table moves were video-recorded so that we could subsequently code behavioral indices of interpersonal synchrony—operationalized as the percentage of time participants stepped synchronously versus asynchronously.

Children with ASD spent a significantly lower percentage of time stepping synchronously with their peer during the child-child condition, t(50.35) = 2.894, p = .006, but this ASD disadvantage was not evident when moving the table with an adult researcher in the child-researcher condition, t(48) = 0.47, p = .934.

Children with ASD were less likely to step synchronously with their peer when moving tables collaboratively, and they benefited less than TD children from the aid of a peer in completing the table-moving tasks. This lower “cooperation benefit” was associated with lower intelligence and social skills and higher alexithymia and autistic traits. The data suggest that joint action is a highly adaptive social process that may be impaired in ASD and not simply explained by motor clumsiness. 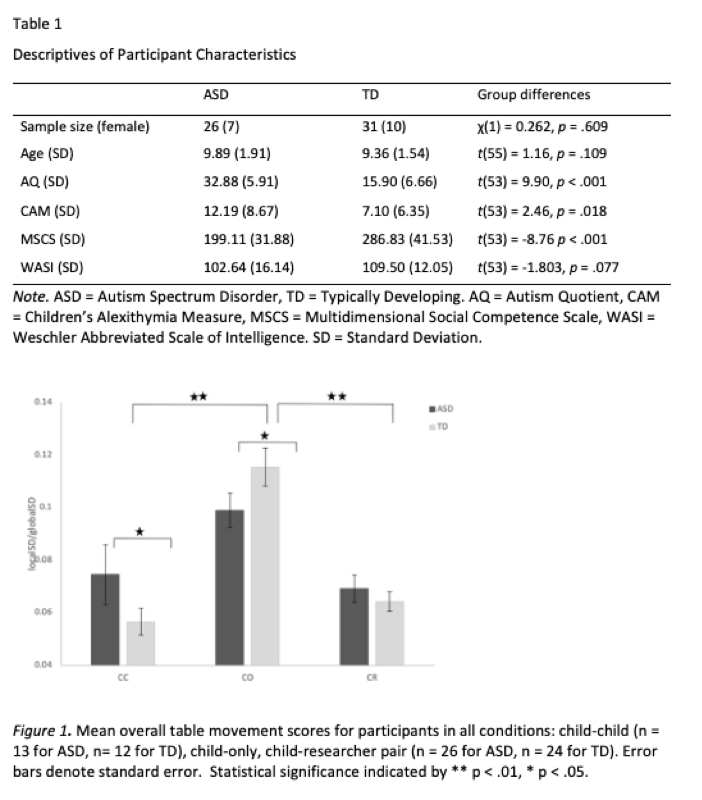