29529
The Electroretinogram As a Candidate Biomarker for Autism Spectrum Disorder

Objectives: This three-center study tested the hypothesis that the ERG discriminates individuals with ASD and typically developing (TD) individuals.

Methods: All participants with ASD met diagnostic criteria according to DSM-IV or DSM-5. In a preliminary sample as of November 2018 (data collection is ongoing), ASD (N= 52 (38M, 14F) and TD (N= 44 26M, 13F) groups were closely matched for age (ASD: 11.8 ± 0.6, range 6.0 to 19.2 years, TD 11.9 ± 0.5, range 5.9 to 19.4 years (p = .92), gender (p = .12), and iris color (p = .54). Individuals with darker irises have lower ERG amplitudes due to the absorption of light by the ocular pigmentation. A custom Troland based, nine-step, light adapted full-field ERG series was performed on both eyes using the RetEval (LKC diagnostics, Washington DC, USA). Flashes of 0.4, 0.8, 1.3, 2.5, 4.0, 6.3, 8.9, 13 and 16 cd.s.m-2 were presented in random order, 2/s, on a 30 cd.m-2 white background. The b-wave amplitudes from the eye with the largest b-wave amplitude at 16 cd.s.m-2 were plotted against flash strength to establish photopic hill functions for each group. Regression analysis using a Gaussian and logistic growth function to model the photopic hill derived the peak of the function for each subject using SigmaPlot 13.0 (SysStat, San Jose, USA). Repeated measures ANOVA and non-parametric tests were used to establish the flash strength that best discriminated between groups and the peak of the photopic hill with p<0.05 as significant using SPSS ver25 software.

Conclusions: These preliminary findings concord with previous research indicating differences in the amplitude and sensitivity of the ERG of individuals with ASD. This indicates altered retinal signaling and/or synaptic connectivity at the level of the cone and bipolar cell complex, which may reflect some of the neurodevelopmental differences in the CNS. By six months, the light adapted cone ERG peak times are adult-like, and by five years, ERG amplitudes are adult-like. Therefore, a difference in the retina’s response to a pulsed increment of light holds promise as a candidate biomarker applicable in early development of children with ASD. 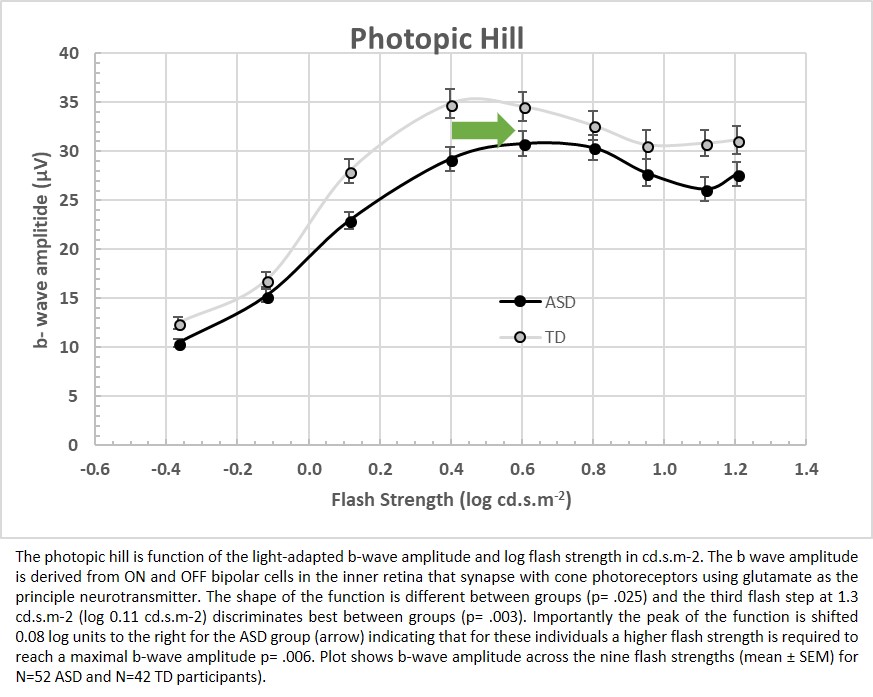