29666
The Impact of Social Stories on Neuroscience Research in ASD: A Qualitative Study of Parents’ Perspectives

Poster Presentation
Room: 710 (Palais des congres de Montreal)
L. A. Alba, A. Losh, J. Blacher and K. K. Stavropoulos, Graduate School of Education, University of California Riverside, Riverside, CA
Background: Neuroscience research has provided helpful information about mechanisms underlying the development of ASD. Although neuroscience research provides pivotal findings, recruiting ethnically diverse participants presents a challenge. Research on participant perspectives suggests that minority individuals report high levels of distrust and limited knowledge about the risks and benefits of research3. Studies have shown that using social stories that describe steps about new situations may decrease stress in children with ASD1,2. However, the impact of social stories in parents of children with ASD is unknown. This study explored the effect of a social story on parents’ willingness to bring their child with ASD to participate in neuroscience research.

Methods: Eighty parents (43 Spanish-speaking, 37 English-speaking) of children with ASD participated in an online survey. Parents were randomly assigned to one of two conditions: the social story condition (N=39), illustrating a child participating in an EEG study, or the read condition (N=41), where they read a description of the EEG process. Before presenting conditions, parents provided reasons for willingness/unwillingness to participate. After seeing the social story or reading the description (post-test), parents reported whether their willingness/unwillingness had changed and if so, were asked to elaborate on the reasons.

Conclusions: Social stories may be a useful recruitment strategy to help parents better understand procedures associated with neuroscience research. In the social story condition, parents did not report needing more information or safety concerns about participating when compared to the read condition. Moreover, no differences in willingness to participate were found between English and Spanish-speaking families for pre or post-test. Thus, social stories may be an effective way to provide more information about neuroscience research to ethnically diverse populations. 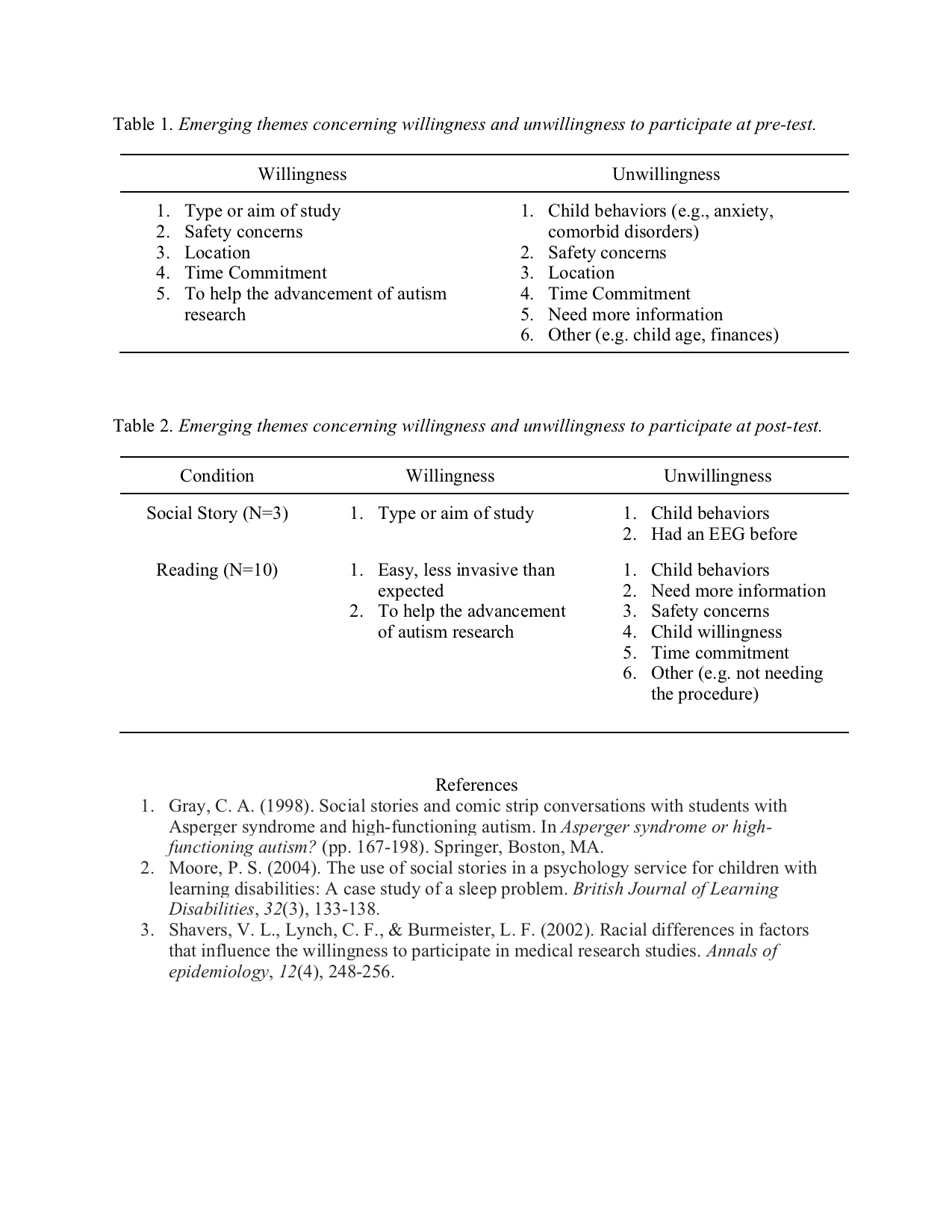