Siblings who have more contact with each other during young adulthood report greater well-being (Sherman et al., 2006). Contact may be particularly important for those with developmental disabilities. Past work, however, highlights that in some cases the positive benefits of social relationships are lessened for those who are higher in Broader Autism Phenotype (BAP) characteristics (Jobe & White, 2007).

The aim of this study was to examine how contact between siblings through traditional (e.g., in person) and technological (e.g., social media, texting) means was associated with young adults’ well-being (depressive symptoms and general health). Further, we examined if links between contact and well-being varied by young adults’ and their siblings’ BAP characteristics.

The data came from a study on sibling influence and young adulthood collected through self-reports from Amazon Mechanical Turk. The data collected resulted in 866 responses to the survey. Participants ranged between 18 and 29 years old (M age = 25.43, SD = 2.54) and lived in the United States. The sample was mostly female (58%) and Caucasian (73%). The 866 participants reported on their own BAP characteristics and those of their closest aged sibling using the Autism Spectrum Quotient questionnaire (Baron-Cohen et al., 2001). Depressive symptoms were assessed with the DASS (Lovibond & Lovibond, 1995) and general health with one item.

Results revealed that when participants and/or their sibling were higher in BAP characteristics, the participant reported more depressive symptoms. In the second step, the analysis revealed a significant interaction of technological contact X sibling BAP. Testing of the simple slopes (Figure 1) revealed that for high sibling BAP there was no association between technological communication and depressive symptoms, but for low sibling BAP the association was negative (b = -.05, se = .02, p < .01, β = -.17).

Overall, these results suggest a nuanced role of BAP for the link between sibling contact and well-being. In particular, technological communication may be more important than traditional communication. In some cases, higher levels of BAP characteristics may minimize the role of communication and in others, it may heighten it. 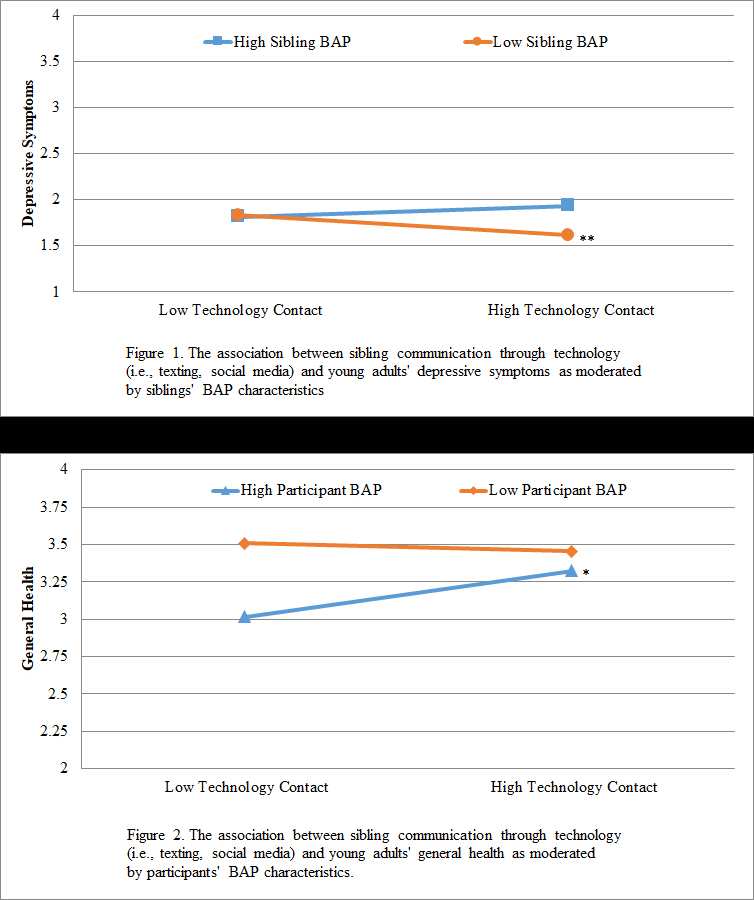