Poster Presentation
Room: 710 (Palais des congres de Montreal)
G. Valagussa1,2, A. Nale2, R. Pirovano2 and E. Grossi2, (1)School of Medicine and Surgery, University of Milan-Bicocca, Milano, Italy, (2)Autism Research Unit, Villa Santa Maria Foundation, Tavernerio, Italy
Background: In a previous study we have validated the use of the Short Sensory Profile (SSP) scale in Italy confirming the existence of sensory impairments in ASD subjects that is related to ASD severity, particularly expressed as under-responsiveness or seeking stimuli and an increased or decreased response to auditory stimuli.

Since tip toe behavior (TTB) is likely to be related to sensorial disorders, it is interesting to assess how the sensorial pattern is different in ASD subjects with and without TTB, for which we developed a standardized protocol of the assessment.

Objectives: The aim of this study is to explore the sensory pattern of Severe ASD Subjects with or without TTB through a validated cross-cultural Italian adaptation of the SSP.

Methods: We administered the Short Sensory Profile in a sample of 50 Italian ASD children (7 females; 43 males; mean age 13.9 years). We chose capable special education teachers who carefully and thoroughly reported the children’s behaviors. The ASD diagnosis was done using the DSM V criteria and was confirmed using the ADOS 2. The presence of Tip-Toe Behavior (TTB) was assessed using both direct observation as well as a structured checklist completed during the day by the main caregiver living with the subject through a standardized protocol. 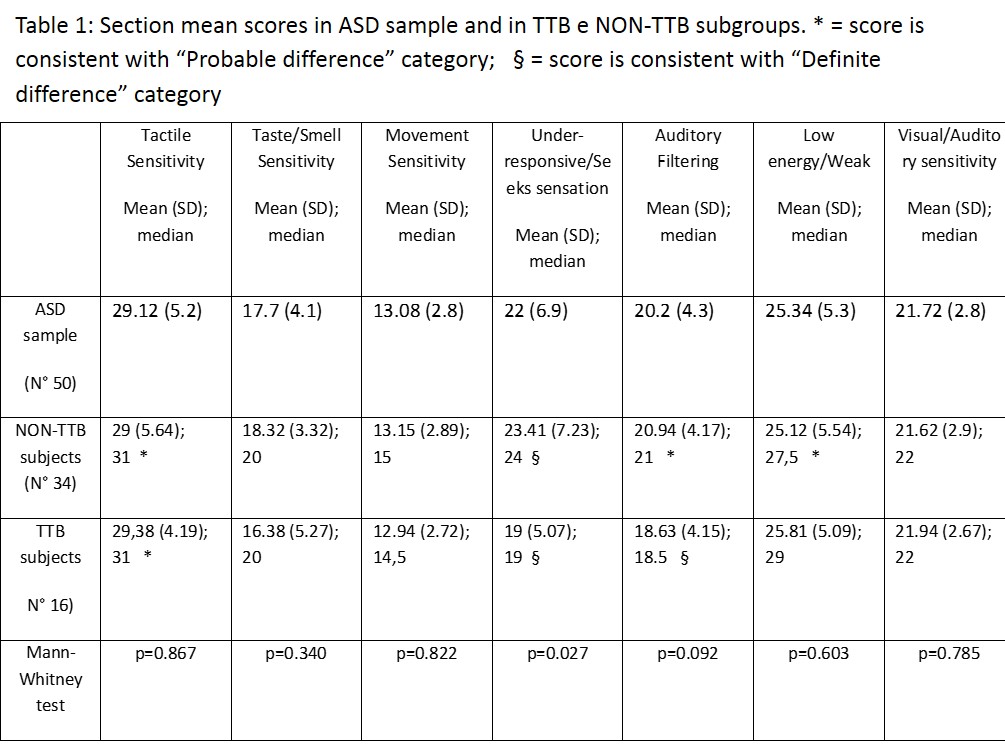