29753
An Exploratory Investigation of Organic Chemicals Measured in Deciduous Teeth: Differences between Children with and without Autism.

Poster Presentation
Room: 710 (Palais des congres de Montreal)
R. Palmer, The University of Texas Health Science Center San Antonio, San Antonio, TX
Background: Shed baby teeth have been established to hold a record of exposure to heavy metals in utero and early childhood. Semi-volatile organic chemicals have been studied in shed baby teeth and this has been identified as a potential epidemiological tool to identify environmental triggers of developmental disorders such as autism.

Objectives: We have applied a comprehensive high-throughput non-targeted screening method to extensively catalog and categorize semi-volatile organic chemicals in shed baby teeth. Chemical concentrations in teeth were then compared between children and without autism.

Results: A total of 11,971 chemicals from 38 shed baby teeth were cataloged, including unknowns without a suitable library match. The average was 315 compounds per tooth. Of the 38 teeth, 22 were from children with autism spectrum diagnoses and 16 were from typical developing children. In general these are xenobiotic compounds with a high confidence score, many of potential interest as toxic agents. A total of 161 compounds of interest were identified. Topical analgesics, ingredients of personal care products, flavors, fragrances, solvents, insecticides and repellants were well represented in the data-set, suggesting the oral or dermal absorption routes of deposition as an active mechanism. Of the 161 compounds of interest, 53 were significantly elevated in the teeth of children with autism compared to the teeth of children without autism. These were largely insecticides, fungicides, microbiocides, solvents such as ethol-based compounds or fuel additives, and phthalates (plastics).

Conclusions: Hair, urine, or saliva samples are limited measures of exposures because they only reflect relatively recent exposures. Using deciduous teeth, like rings of a tree, chemical exposures are laid down over time and sequestered in layers of tooth enamel which begins forming in the 2nd trimester. These initial investigations are important for informing future epidemiologic research about the types of compounds that are present during critical periods of development. This research has implications for promoting avoidance of specific compounds of toxic chemicals during early development. 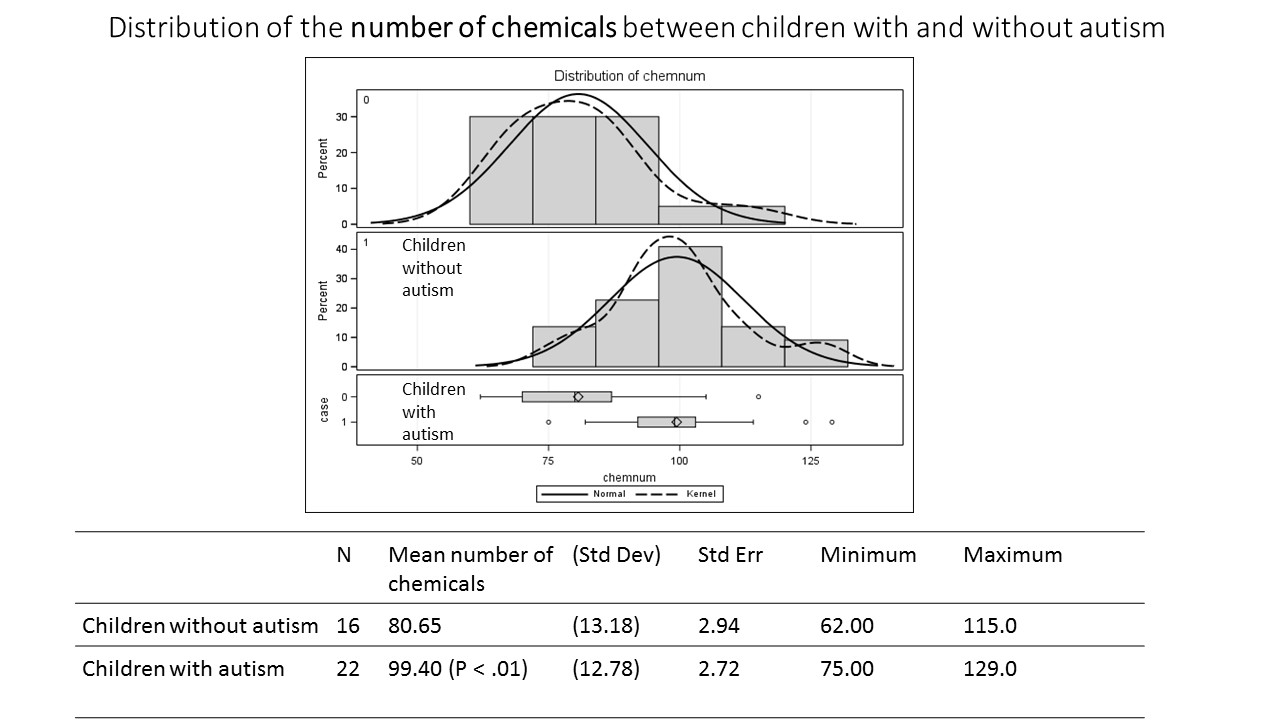