Recent research has shown that autistic children can demonstrate a preference for interacting with social robots and that socially assistive robots placed within the home can result in tangible social benefits in autistic children. However, any benefits diminish when the robot is removed from the home after the intervention. In addition members of the autistic community have questioned whether social robots are an appropriate methodology for modelling human social skills. To address this concern, the approach in this study used robots to create a socially-inclusive environment within which autistic children can be motivated to engage in social communication.

This study used an affordable commercially available robot ‘Cozmo’, which was developed with the capacity to model social-emotional processing during interaction with humans. We aimed to explore robot-child interaction in addition to child-child interaction elicited in autistic and non-autistic pairs of children while they played with two Cozmos.

We analysed the social and informational interactions between two pairs of autistic children and two pairs of non-autistic children. The children, aged 9-11 years, took part in two play sessions with Cozmo, one unstructured (free play) session and one structured (task-based) session. The children played in pairs to enable analysis of child-robot and child-child interactions. The sessions were video recorded and independently analysed by two researchers.

This study was not designed to be an intervention, rather to explore the social interaction that can be spontaneously elicited whilst playing with Cozmo. Autistic children enjoyed this and engaged with Cozmo and the other child in a social manner. Structuring the play environment can markedly reduce social communication differences between autistic and non-autistic children whilst playing with Cozmo. Future work can focus on how autistic children’s play with robots can best be structured and supported to maximise the benefits for child-child social communication. This initial study was small, and in addition to increasing numbers, future research can explore mixed pairs of autistic and non-autistic children. Overall, this research demonstrates initial support for the approach of using robots to create a socially-inclusive environment (rather than focusing on socially assistive robots teaching social skills to autistic children). The commercially available nature of the robot also means that any benefits can extend beyond discrete research projects.

The Demonstration will provide a poster of the findings, a Cozmo and a film of two autistic children playing with the robot.

Declaration: This research was funded by Anki who produce Cozmo. All children were allowed to keep a Cozmo as a thank you for participating. 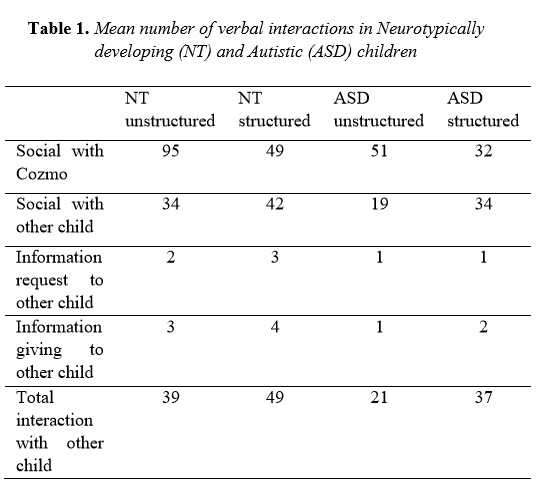