29791
Spontaneous Mentalizing in Children with and without ASD

A deficit in Theory of Mind (ToM) or mentalizing has been argued to play a causal role in the development of social difficulties in individuals with autism spectrum disorder (ASD). However, findings are inconclusive as many individuals with ASD pass standard mentalizing tasks, in which they are required to explicitly reason about the beliefs of another agent. It has been argued that they succeed by using compensatory strategies, but still encounter difficulties in daily life because individuals with ASD suffer from a specific impairment in spontaneous mentalizing. There is initial support for this hypothesis, however, studies are scarce and are mainly based on adult research.

The current study is still ongoing and includes at this point 44 children between 7 and 13 years old, of which 23 children with a formal ASD diagnosis and 21 neurotypical children. We aim to eventually include 35 children in each group. Participants carried out a spontaneous mentalizing paradigm based on the ball detection task developed by Kovàcs, Téglás and Endress (2010). This is a false belief task that consists out of two phases: the belief formation phase and the outcome phase. In the first phase, an agent and the participant form a false or true belief about the location of a ball. In the outcome phase they have to detect if the ball is present or not. The ball was present in 50% of the trials, independent of what happened during the clip. This paradigm allows us to investigate how reaction times to the ball are affected by their own belief and by the belief of an agent, hence giving us an implicit measure of mentalizing. ASD symptomatology was measured by two questionnaires namely the Social Responsiveness Scale 2 (SRS-2) and the Social Communication Questionnaire (SCQ) as well as by the ADOS-2.

Ball detection time of neurotypical children is influenced by the belief of the agent, being faster when the agent believed the ball was behind the occluder, indicating that they spontaneously take into account the belief of the agent. Conform our hypothesis, this effect was absent in children with ASD, suggesting impaired spontaneous mentalizing. This effect was negatively correlated with ASD symptoms. Children with more severe ASD symptomatology showed stronger impairment in spontaneous mentalizing. 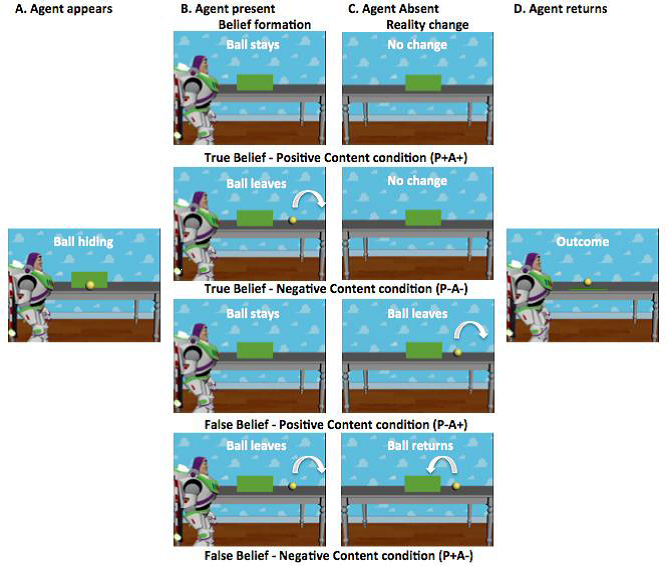