Objectives: To investigate if social and non-social autistic traits measured in the typical population and autism domains measured in autistic individuals are genetically dissociable.

Methods: Genetic correlations of autistic traits (systemizing, empathy, social relationship satisfaction, and scores on the Social and Communication Disorders Checklist (5,421 < N < 139,604)), and of RBS-R and ADOS social and communication subscales in 2989 autistic individuals.

Results: Systemizing is positively genetically correlated with autism (rg = 0.26±0.06; P = 3.35x10-5), whilst SCDC, self-reported empathy, friendship and family relationship satisfaction are negatively genetically correlated with autism (-0.39 < rg < 0.26, all P < 5x10-4). There is limited shared heritability between the social traits (empathy, friendship and family relationship satisfaction) and systemizing. Clustering analyses of 15 phenotypes that are genetically correlated with autism identified a social cluster with the social phenotypes clustering with each other, measures of intelligence clustering close to each, and neuropsychiatric conditions clustering close to each other. Systemizing did not cluster with any of the phenotypes, and was genetically correlated only with autism and measures of intelligence (Figure 1A). Investigating genetic correlations between friendship satisfaction, empathy, and systemizing among 9 psychiatric conditions, only autism had the combination of negative genetic correlations with both empathy and friendship satisfaction, and positive genetic correlation with systemizing, mirroring the DSM-5 and ICD-11 criteria for autism (Figure 1B). Polygenic scores for systemizing are associated with RBS-R scores (Beta = 0.047±0.018, P = 0.010) , but not with ADOS social and communication subscale (Beta = -0.008±0.016, P = 0.60). Genetic correlation between RBS-R scores and ADOS social and communication score is low (rg = 0.15±0.46, P = 0.74) and significantly lower than 1 (P = 0.034). 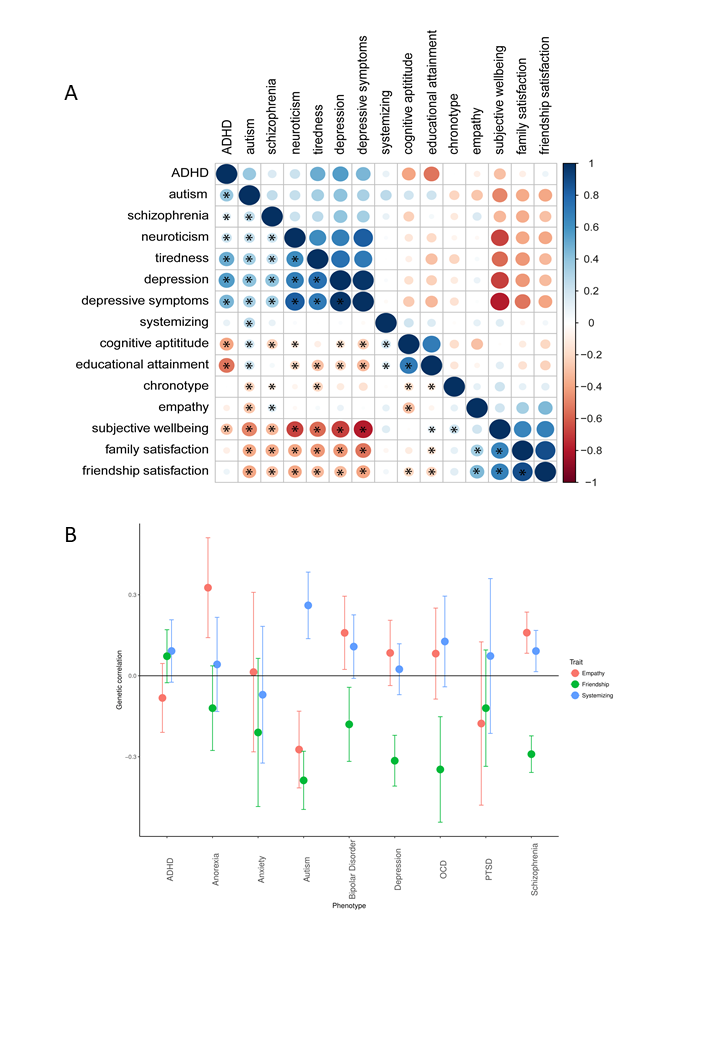