29961
Validity of Subcategories of Repetitive Behaviors in Adolescents and Adults with ASD.

Poster Presentation
Room: 710 (Palais des congres de Montreal)
C. R. McDermott1 and V. Bal2, (1)Neuroscience & Cell Biology, Rutgers University-New Brunswick, Piscataway, NJ, (2)Graduate School of Applied and Professional Psychology, Rutgers University-New Brunswick, Piscataway, NJ
Background: Restricted and repetitive behaviors (RRBs) are core features of ASD. Previous studies have suggested two domains of RRBs measured by the Autism Diagnostic Interview-Revised (ADI-R): Repetitive Sensory Motor (RSM) and Insistence on Sameness (IS; e.g., Cuccaro et al., 2003). Bishop and colleagues (2013) demonstrated convergent validity of these domains with the Repetitive Behavior Scale-Revised (RBS-R) in a sample of school-age children. Consistent with previous studies, IS on both instruments were not significantly associated with IQ. A third domain, Circumscribed Interests, was positively correlated with IS, but showed differential associations with IQ across instruments. Studies have not yet considered the validity of RRB subcategories specifically in older adolescents or young adults. There is some evidence that broad domains of RRBs may change with age (e.g., Lord et al., 2015), suggesting a need to understand whether the constructs defined in children are valid in older samples.

Objectives: To investigate the construct validity of subcategories of RRBs measured by the ADI-R and RBS-R in adolescents and young adults.

Methods: Participants were 544 adolescents and adults (M age= 15.73, SD=2.40 years) selected from existing samples of research-referrals with ADI-R, RBS-R and NVIQ data. RSM and IS domains were computed for each instrument; circumscribed interests (ADI-interests) was omitted from ADI-IS to allow for separate analysis (Bishop et al., 2013). Pearson correlations between measures and domains were examined in the overall sample and by age (13-15, 16-17 and 18+; Figure 1).

Associations between measures were moderate-to-strong for IS and RSM across all age groups; interests exceeded .3 for only the 18+ group. Significantly fewer adults than children were rated as having circumscribed interests reported on the ADI-R (X2=9.02, p<.05); rates did not differ on the RBS-R.

Conclusions: Consistent with previous studies of school-age children, RSM and IS subscales on the ADI-R and RBS-R demonstrate reasonable convergent validity in adolescents and adults, though the relationship between circumscribed interests and IQ differed across instruments. Preliminary analyses suggest that, for adults, RSM behaviors may not be associated with IQ and the ADI-R may underestimate circumscribed interests. Data from an additional 56 adults will be integrated; confirmatory factor analyses and further investigation of possible differences in the manifestation of RRBs in adults will be conducted. 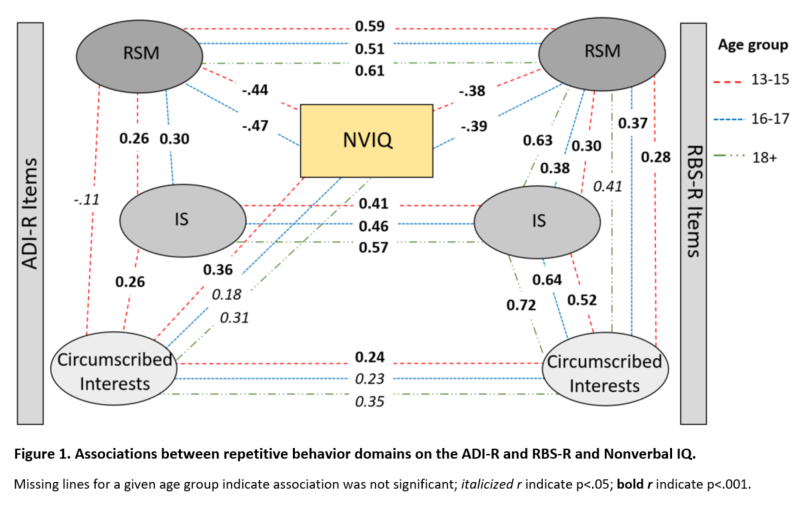