29983
Associations between the Home Language Environment, Maternal Education, and Naturalistic Response to Joint Attention in Infants at High and Low Familial Risk for ASD

Responding to joint attention (RJA), or the ability to respond to cues from another to share attention to an object, is a pivotal socio-cognitive milestone in infancy. RJA abilities are associated with social and language outcomes later in childhood (e.g., Morales et al., 2000). Moreover, early deficits in RJA are a hallmark of autism spectrum disorder (ASD; Mundy et al., 1986).

Some studies have found that specific caregiver behaviors such as attention-directing styles (Tomasello & Farrar, 1986), persisting tendencies (Saxon & Reilly, 1999), and sensitivity (Hobson et al., 2004) are associated with RJA. However, little is known about the impact of more global aspects of the home environment, like the amount of caregiver speech. Furthermore, despite associations between RJA and language outcomes, it is unclear whether the home environment contributes to both abilities early in development.

Conclusions: Preliminary results suggest that characteristics of the home environment may relate to RJA. While the number of infant-caregiver conversational turns had no influence, more adult words heard in the home was associated with greater RJA sophistication, particularly for infants whose mothers did not have a college degree. These findings suggest that the influence of more global environmental features may vary by family socio-economic status, acknowledging that shared genetic factors may shape aspects of the home environment. Future work seeks to replicate these findings and examine some of the more proximal factors driving our results. 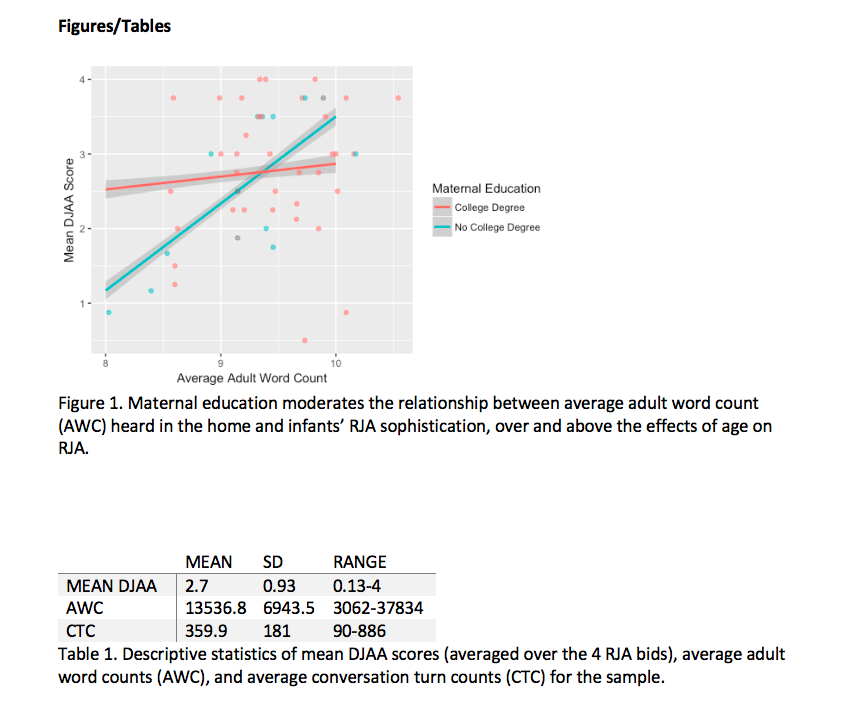