30006
Does the Prevalence of ASD Continue to Rise?

The rise in Autism Spectrum Disorder (ASD) prevalence has generated considerable concern. However, the literature has long debated whether this increase reflects changes in diagnostical practices (e.g., improved screening, better community awareness, shift of diagnosis), or rather a true increase in the risk of developing ASD. The process of establishing an ASD diagnosis in Israel underwent two major changes during the last decade; the 2007 decision that ASD diagnosis given by a medical specialist will be confirmed by a developmental psychologist, and the release of the DSM-V in 2013 which requires a higher threshold of symptoms for ASD diagnosis. The effects of these changes on ASD diagnosis rates have not yet been thoroughly examined.

The aim of the current study was to depict the prevalence and incidence of ASD in Israel, and to examine possible effects associated with increasing the threshold for diagnosis. To achieve this goal, we examined all ASD diagnosis given by medical specialists in a nationally representative cohort of children born between 1999 and 2016.

Data indicate a steady rise in ASD prevalence over time, especially in boys. The overall prevalence of ASD among 8-years-old children increased from 0.70% (girls 0.24%; boys 1.14%) in 2007 to 1.17% (girls 0.39%; boys 1.91%) in 2017. Cumulative annual incidence of ASD increase more readily for children born in later birth years, but a delayed age of diagnosis was still observed for many children.

Our results demonstrate that ASD prevalence continues to rise, despite efforts to increase the threshold for diagnosis. The rise in cumulative annual incidence in later birth years may be additionally attributed to a trend for earlier age at diagnosis, but additional efforts need to be made to identify children who do not receive diagnosis or are missed by early evaluations. Our findings suggest that the rise of ASD prevalence is evident even when using restrict and definite ASD diagnosis, providing some support for etiological involvement of biological and environmental factors in ASD risk. 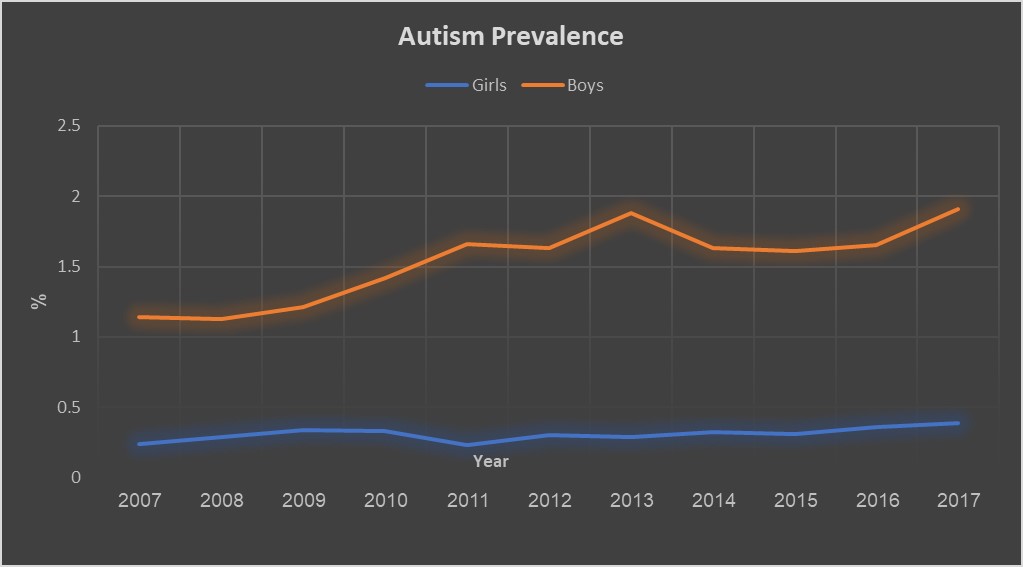