30097
Effect of Project Impact on Social Imitation in Children with ASD: A Randomized Controlled Trial

Poster Presentation
Room: 710 (Palais des congres de Montreal)
S. Van der Paelt, P. Warreyn, A. Piatti and H. Roeyers, Department of Experimental-Clinical and Health Psychology, Ghent University, Ghent, Belgium
Background: Children with ASD show deficits in imitation skills, which are especially pronounced in a social-interactive context (Rogers et al., 2003). Research has shown that social imitation during play is related to language, social reciprocity and symbolic play in children with ASD (Ingersoll & Meyer, 2011). Project ImPACT (Ingersoll & Dvortcsak, 2010) is a parent-implemented intervention, focusing on social communication in children with ASD. One of the intervention targets is the increase of social imitation through the use of interactive and behavioural strategies during daily routines. Previous studies have shown positive effects on language and communication (e.g., Ingersoll & Wainer, 2013; Stadnick et al., 2015). Studies on the effect of Project ImPACT on social imitation are lacking. Moreover, as yet no RCT’s have been published.

Objectives: The goal of the present study was to test the effect of Project ImPACT in a community setting on the spontaneous imitation skills of children with ASD.

Procedure: Imitation skills were assessed with the spontaneous imitation task (Ingersoll, 2008) before and after receiving Project ImPACT (M = after 5.86 months, SD = 1.23) or after a similar time interval (M = 5.60 months, SD = 0.74) in the TAU group. Administrators were blind for group assignment. Imitation skills were coded afterwards from video by coders who were blind for group assignment and testing moment.

Conclusions: Project ImPACT seems to improve social imitation skills of children with ASD through parent training. This is an important finding, given the association of imitation with other social-communicative skills. Results on a larger sample, including follow-up data will be presented at the meeting. 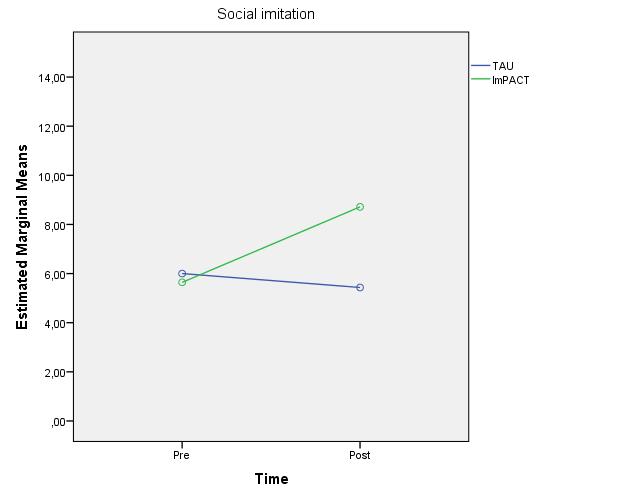