For a small minority of autistic individuals, characteristics linked to clinical features of autism are associated with engagement with the police and criminal justice system as an offender. However, little is known about whether legal professionals and jurors take autism-related factors into account when making judgements about their offending behaviours. Furthermore, an autistic person may be viewed as strange or awkward in court. This is potentially critical because observers often base their judgments of an individual’s credibility on verbal and non-verbal cues such as eye-contact, body movements, fidgeting, surface features of speech, and displays of emotion (DePaulo et al., 2003). However, several studies have recently reported that informing observers of an individual’s autism diagnosis results in significantly more favourable judgements about them in everyday contexts (e.g., Sasson & Morrison, 2017).

The aim of the present study was to examine mock juror perceptions of credibility and culpability of a defendant who is described as displaying autistic-like characteristics and behaviours, and whether the provision of information about the defendant’s autism diagnosis alters these perceptions.

160 jury-eligible participants read a vignette describing a 27-year-old male who was brought to the attention of police for suspicious and aggressive behaviours and displayed unusual behaviours once in court. Half of participants were informed that he had a diagnosis of autism and read a report from a forensic psychiatrist about what autism is and how the defendant was affected by it (‘Label+info’); the other half received no diagnosis label or further information (‘No info’). Participants then rated the defendant’s credibility, in terms of likability, cognitive functioning, and honesty, as well as perceived blameworthiness, guilty verdict and sentencing leniency. Participants’ responses to follow-up open ended questions formed the basis of a qualitative analysis of the reasons for their ratings and judgements

The information provided to jurors about an autistic defendant can have a profound effect on their judgements of his likeability, honesty, blameworthiness, guilt and sentencing. This has important implications not only for the courts, but also for other areas such as employment and social situations where the disclosure of an individual’s autism diagnosis may impact others’ perceptions of them. 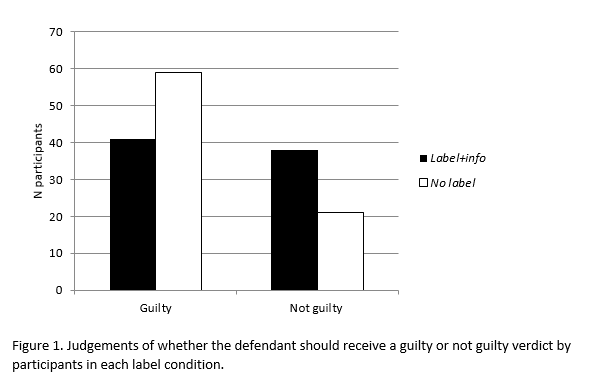